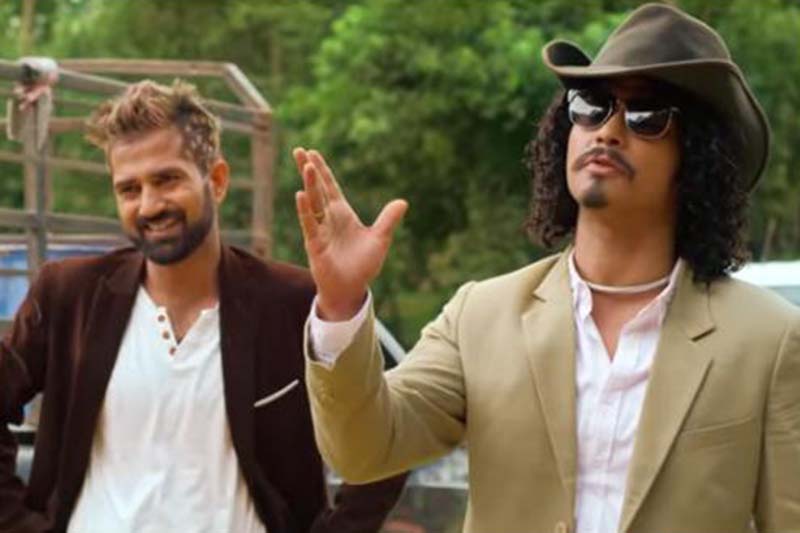 Photo: youtube.com
Kathmandu Haku Kale (Saugat Malla) is back again with his popular dialogue: "Bal Haina Pasa, Buddhi Chala". Loot 2, the sequel to Loot, has been cooked with a lot of spices-Haku Kale's double entendre, item dance, Gofle (Dayahang Rai) falling for the bar girl, action but a storyline that is easy enough to guess. Directed again by Nischal Basnet, Loot 2 tries to create the same magic it did with its first instalment with its cult characters, however it is not as awesome as Loot. In Loot 2, Haku Kale seems more fierce, more powerful and smarter, however his opponents-Gofle, Nare (Karma Shakya), Khatri (Prateek Raj Neupane) and Pandey (Sushil Raj Pandey) are portrayed as miserable and pitiful characters. The story takes place four years after first instalment — now Haku Kale fights donning suits. He lives with his wife Putali (Srijana Subba) in bungalow, not an old stinky bhatti. Now he smuggles petrol and diesel with his three men. The first-half of the film has shown the changing lifestyle of Haku Kale and his shrewdness. On the other hand, the four escape from jail after the devastating earthquake and are looking for Haku Kale to take their revenge. A few gags by lisper Pittal (Bipin Karki) when he talks, Haku with his signature dialogues — if it was just strength that determined the king of the jungle, then an elephant would be the king — and Gofle's physical comedy be it eating a burger or flirting with the bar dancer Sundari (Alisha Rai), it is hilarious. The second-half wakes up with action sequences between Haku Kale and his three men with Gofle and the other three. Gofle and his friends attack Haku Kale and his men continuously, however, Haku Kale seems indifferent to all the attacks. It seems that the story forgets its direction here. It comes back on track, but one can easily guess what happens next. The tedious and stretched fight between the two groups and climax of the story is not mind boggling. The story is not spectacular. Though Haku Kale's character has been made fiercer and more powerful, the director, on the other hand, has failed to develop the other four characters. Gofle, Nare, Khatri and Pandey seem foolish and ignorant as compared to Haku Kale. The four, who were jailed due to Haku Kale's cunning, have been portrayed as more hot-tempered, foolish, furious and ready to fight without thinking. The director has incorporated the post-earthquake period, border blockade and petroleum smuggling and how people like Haku Kale took advantage of such a situation in the film. Regarding the actors, Loot 2 belongs to Malla. Be it Putali's lovable husband, the idea master and negotiator to get his work done, or the headstrong fighter, Malla as Haku Kale is phenomenal. Dayahang as Gofle is apt. Karki as Pittal and Alisha as Sundari are noteworthy. Kali Prasad Baskota's Thamel Bazar is already a hit and eye-catching.
#Dayahang Rai #Nischal Basnet #Saugat Malla #Karma Shakya #loot #Haku Kale #Loot 2 #Sushil Raj Pandey #Prateek Raj Neupane #post-earthquake period
You May Also like: