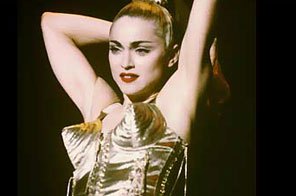 LOS ANGELES: American Idol sensation Adam Lambert has a new mentor in pop superstar Madonna, after she gave him career advice during a guitar lesson at her New York home.
The singer was stunned when he discovered his guitarist was Madonna's guitar teacher, and thrilled when he was invited round to her house for a music lesson.
Lambert says, "It was the first time I can remember getting super starstruck... I had a great conversation with her. My guitar player is her guitar teacher and we were both in New York and he said, 'Would you like to come over?'
"I went to her house... and she came in in, like, no make-up, yoga wear, just totally Zen... She walked into the room and her presence is very powerful... and, at first, I could tell she was kinda checking me out... and the first thing I said to her was, 'Oh my God.'
"I talked to her about celebrity and how to deal with it all and she gave me a couple of words of wisdom - she said, 'Just keep your eye on the prize, put your blinders up and don't get sidetracked with all the extra fuss.'"

#Madonna offers words of wisdom to Lambert
You May Also like: