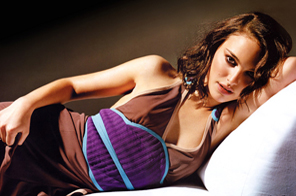 LONDON: Natalie Portman cut herself as a teenager.
The 28-year-old actress has revealed playing a girl who died in 1995 gangster movie 'Heat' had a profound effect on her, resulting in her harming herself after an argument with her mother.
She told the Los Angeles Times newspaper: "Just as what you are feeling in your life affects your acting, what you act in definitely affects what you are feeling in your life.
"I made 'Heat' when I was 14 and played a girl whodied. A year later, I got into a fight with my mother and cut myself. I had never done it before and I never did it after that, but I think having my wrists bloody in a movie definitely affected my psyche."
Natalie revealed acting has always scared her as she is constantly worried people won't find her performances believable.
She is planning to focus on directing films in the future, but admits the prospect is equally as terrifying.
The star explained: "I really love directing. Fear is intrinsic to everything you do as a creative person. You're constantly putting yourself up there to be trashed. If I thought about it too much, I'd just be crippled. I'd rather create."

#Natalie Portman reveals heat torment
You May Also like: