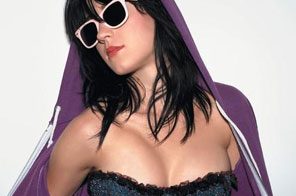 LOS ANGELES: Katy Perry had so much fun as a bitchy guest judge on American Idol she would quit her music career to take the job full-time.
The I Kissed A Girl hitmaker filmed her stint as a guest judge on the U.S. singing contest last year (09), following the departure of Paula Abdul. Her appearance aired on Tuesday night (26Jan10).
And, though she and regular judge Kara DioGuardi appeared to dislike one another, Perry isn't about to let a clash of songwriters get in the way of her Idol ambition.
Now that music mogul Simon Cowell has announced he's planning to leave the show when his current contract expires in May (10), the pop star wants to fill his seat.
She says, "The American Idol experience was awesome. If I was offered that job as a permanent host, I would ditch my career and take on that career."

#Perry: 'I want idol job'
You May Also like: