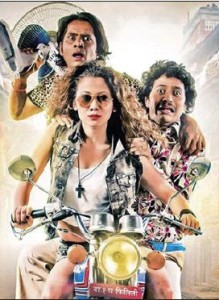 Kathmandu: Comedy is perhaps one of the best means of entertainment. And the makers of Resham Filili know this. So they have adopted this mantra and succeeded pretty much. Caricature, slapstick, nonsensical stuff, satire, funny lines — you get varied forms of comedy with the main characters making fools out themselves in order to amuse their audience. The much awaited Resham Filili serves the comic dose to those who want to have a good time laughing at anything. Running around gullies and roofs, comic action scenes, comical sequences, quirky facial expressions and costumes, comical dialogues along with cringe-comedy related to sex will make one laugh. When these meet issues like corruption, foreign employment along with dreams of people and good music, romance, friendship, action and drama, Resham Filili is the answer for your kind of entertainment. Pranab Joshi has directed and written a film that is entertaining. It is a story of friendship between Resham (Vinay Shrestha) and Hariya (Kameshwor Chaurasiya), their dreams and how they achieve those. Nothing much in it actually; the humour is not intelligent nor is the story telling. Resham has been duped of his money to go to Qatar but he has a big responsibility to marry his sister off. Hariya wants to an actor. The film goes back and forth to tell how they got together. In the meantime, the duo pull odd jobs and trouble to themselves. Then, there are goons, chases and exaggerated action scenes in between Hariya’s caricature of Shah Rukh Khan and other humorous scenes — you will feel restless as the plot is going everywhere by now but in the right direction. And in this commotion, laughter is generated — which is the trick. Since Resham Filili is “based on a fake story”, you will also experience logical lapses. What keeps the film going is Kameshwor Chaurasiya and his natural talent for comedy when the story lacks. Chaurasiya is the soul of the film. His comic timing is incredible and is very natural. However, Shrestha is no less. He has gotten into the skin of his character. As a very gullible guy, Shrestha charms everyone. And the supporting characters have supported them just fine. Karma and Menuka add funk to the film. The film has been treated from different angles but a few frames of ariel shots are rough. When it comes to music, Resham Filili is already a hit.

#Resham Filili #Movie #Nepali Movie
You May Also like: