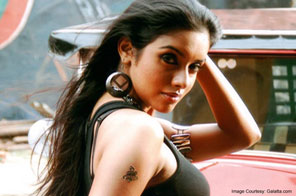 MUMBAI: Those cine stars who quake in their boots every time they have to appear for a press conference can learn quite a few things from the smart Asin.

Like, for instance, how to dodge questions the media asks them, how to sidestep anything with the remotest whiff of controversy, and how to still be so charming, that not one person present feels offended that the lady didn’t answer their question.

Asin was in Delhi recently, and she came in quite, quite late. Nah, we aren’t saying she came late – it was the fog. Didn’t let her plane land in the morning at all... Anyway, once she came, she spoke at length about what the Filmfare awards mean to her (she was here to be a part of the Idea Filmfare press conference). When asked who she thinks is the fave to win the award this time round, she said, “I am quite my own favourite, thank you.” She didn’t name anyone and get a catfight started – much as everyone would’ve loved her to. Phir, someone asked her about the three Khans. Uh, oh... whoever asked the question called her Asin, with the emphasis on ‘i’ making it sound like ‘e’. “Please, pronounce my name correctly. It is A-sin. And ‘A’ is to be pronounced like it is in Sanskrit... like ‘aa’,” said Asin tartly. That taken care of, she went on to the Khans. “Of course, I haven’t worked with Shah Rukh. Not that I don’t want to, but haven’t had a chance yet. So, I have only met him on a couple of occasions,” said Asin, and then went on to sum up the three Khans in one word – actually one for each one of them. “Aamir...” Asin paused to think and said, “Focus. Salman would be a cool attitude towards work and life (that’s not one word, but no one pointed that out), and Shah Rukh, I’d say charm,” said Asin, making every print journo present there scribble furiously on their notepads.

Earlier on, someone else had asked her about Aamir’s film, 3 Idiots, the spate of student suicides being attributed to the film and her thoughts on it. Controversial question, no? Do you think Asin answered that? Naah! She smiled, looked nonplussed, and then said, “No comments. It would be better if stuck to answering questions pertaining to my work.” Didn’t we say she’s one smart cookie?