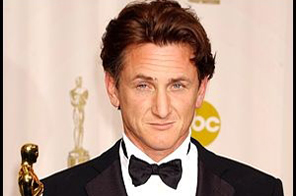 LOS ANGELES: Oscar-winning actor Sean Penn is putting his Hollywood career on hold to spend more time with his family and could be out of action for up to a year, it was reported Wednesday.

The 48-year-old has dropped out of two films he had been due to star in, a long-awaited update of "The Three Stooges" and crime thriller "Cartel," the Hollywood Reporter revealed.

It was unclear how long Penn's sabbatical would last but sources told the Hollywood Reporter it could be as long as one year.

Penn won the second of his best actor Academy Awards earlier this year for his performance in gay rights drama "Milk."

The actor's marriage to Robin Wright Penn has come under strain, with the couple twice filing for divorce in the past two years only to halt proceedings on each occasion, most recently in May.

Although Penn has taken a break from Hollywood, the actor has already completed two films due for release, Terrence Malick's "The Tree of Life" and "Fair Game," an adaptation of outed CIA operative Valerie Plame's memoir.

#Sean Penn puts 'career on hold' for family
You May Also like: