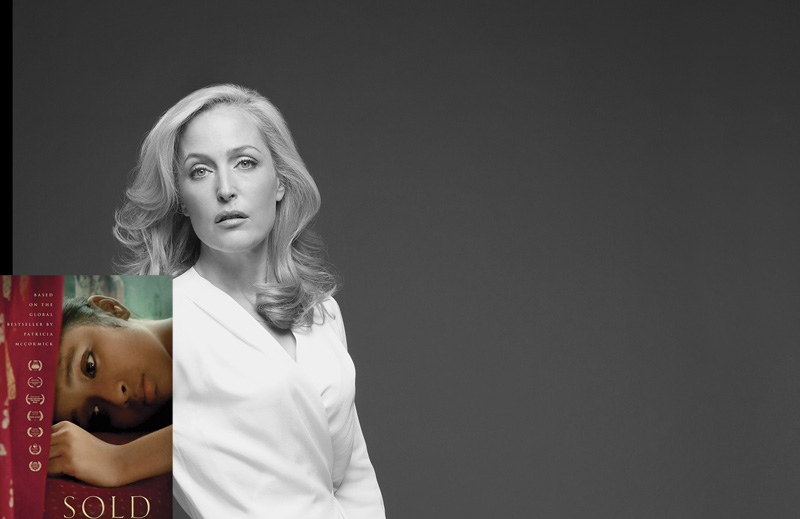 NEW YORK: When actress Gillian Anderson chose to appear in a new movie about a Nepali girl who is unwittingly sold by her impoverished parents to an Indian brothel, her decision had nothing to do with the part, she says.

Rather she was drawn to what the film, SOLD, which opens in New York this week reveals — the exploitation of millions of girls who are sold into sexual slavery around the world.

“It’s not the role. It’s got to do with the campaign,” the American actress told the Thomson Reuters Foundation.

The film juxtaposes breathtaking scenery shots of the Himalayas with gruesome images of violence and degradation in the brothel and slum where the girl, named Lakshmi, and others are held captive.

Anderson, known best for her role as Agent Dana Scully in the popular US television series The X-Files, plays a photographer who joins forces with an activist group trying to rescue the enslaved women and children.

Anderson, 47, has been involved in a number of charities, from Neurofibromatosis Inc that supports research into a genetic disorder that afflicted her brother to SA-YES that mentors youth in South Africa.

But the issue of child sex trafficking has risen to the top of her list, she said during a recent media junket promoting the film in New York.

“It’s always important to choose the causes that break our hearts and this, the thought of children being trafficked for sex, breaks my heart,” she said. “So I feel quite empowered and impassioned.”

Globally, nearly 21 million people are victims of human trafficking, a $150 billion industry, according to the United Nation’s International Labour Organisation.

Of that total, an estimated 4.5 million people are forced into sex work. Children are estimated to comprise 5.5 million of the overall victims, according to the ILO.

“It is so disturbing and so ugly, but what’s important is that it is in our face so that we are moved to action,” Anderson said.

SOLD is backed by a campaign called TaughtNotTrafficked which aims to raise awareness of trafficking, support survivors and lobby for government and policy changes in partnership with advocacy groups worldwide.

“The movement behind the film is bigger than the film itself,” she said.

While in limited theatrical release, the 97-minute film can be screened on request through a company listed on the website SOLDtheMovie.com. Such on-demand showings allow people to arrange screenings in markets where it otherwise might not play.

Graphic scenes in the full-length version depict rape, beatings and abuse. But a shorter version suitable to be shown in schools also is available.

“The power of the film is that it has those scenes because that is the reality of what happens,” Anderson said.

“It’s a very difficult movie,” she said. “It’s a difficult subject matter to talk about children being systematically raped but we need to get past that.”

SOLD was directed by Jeffrey D Brown, who won an Academy Award in 1986 for the short film Molly’s Pilgrim, and features Indian actress Niyar Saikia as Lakshmi.