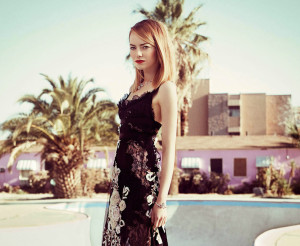 Photo: fashionndesain.com
LONDON: Hollywood actress Emma Stone does not think she is Woody Allen’s “muse” but says the label has been attached to her just because she’s a woman. The Birdman star has been labelled as the 79-year-old legendary director’s inspiration but she insists it is only because she is a woman, reported Guardian online. “I don’t think he would agree with the muse idea. There were two films in a row where the characters, for whatever reason, he wanted me to play them. He’s working with different people now. (This just) gets attached to the women,” she said. The 26-year-old beauty also hit back at claims she is regularly paired with older men in his films. “(Starring alongside Joaquin Phoenix) was a pretty big draw... He’s a truly brilliant actor. Just to speak solely of Irrational Man, the relationship is genuinely a plot point. It’s pretty openly discussed in the film that this is a student who is falling in love with her professor, and she wants to bring this intelligence and almost toxic energy into her life.
#Hollywood #London #Birdman #actor #Woody Allen #(Joaquin Phoenix #Emma Stone
You May Also like: