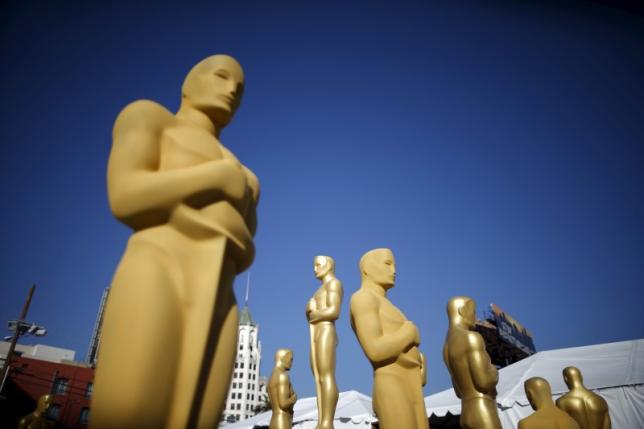 Oscar statues are painted outside the entrance to the Dolby Theatre as preparations continue for the 88th Academy Awards in Hollywood, Los Angeles, California in this February 25, 2016 file photo. REUTERS
NEW YORK: Shares of 21st Century Fox could be set for a rare Oscar rally if the global media conglomerate takes home gold at this Sunday's Academy Awards ceremony. The Oscars, which draws some of the biggest audiences of any single annual television event, typically have little effect on share prices of big publicly traded companies with movies in the running, analysts said. "Normally it's not terrifically meaningful for stocks, but here and there you can get situations where it matters a little," FBR Capital Markets analyst Barton Crockett said. This time, it could matter to Fox, Crockett said. That is partly because Fox fielded movies that not only fared well at other awards ceremonies but also at the box office, in a change from the last two years, Crockett said. Fox led studios this year with a total of 26 Oscar nods, including 12 for best picture-nominated revenge drama, "The Revenant." Other Fox films with nominations in top categories include "Brooklyn" and "The Martian." Filmed entertainment accounted for nearly a third of total second-quarter revenue at Fox, which also runs cable, television and other entertainment operations. "The Revenant," starring Leonardo DiCaprio as a bear-mauled and ice-battered explorer, blew away initial expectations and has grossed $383.6 million worldwide since opening in late December. The movie, with a $135 million budget, is still in theatres, a big factor in how much a company will gain when its film is nominated for or wins an Oscar, said BofA Merrill Lynch analyst Jessica Reif Cohen. An Academy award nomination or win could extend the time a movie is shown in theatres, boosting a film's box office proceeds. "If DiCaprio wins ... it could be a significant boost," Cohen said. A nomination or win also increases profit over the longer term by increasing movie rentals, DVD purchases and on-demand cable contracts, she said. Shares of Fox gained nearly 4.5 percent on Jan. 14 after Oscar nominations were announced, but are little changed so far this year compared with a 4.4 percent decline for the broader Standard & Poor's 500 stock index. In 2015 Fox shares fell 26 percent.
#Oscar #Twenty-First Century Fox
You May Also like: