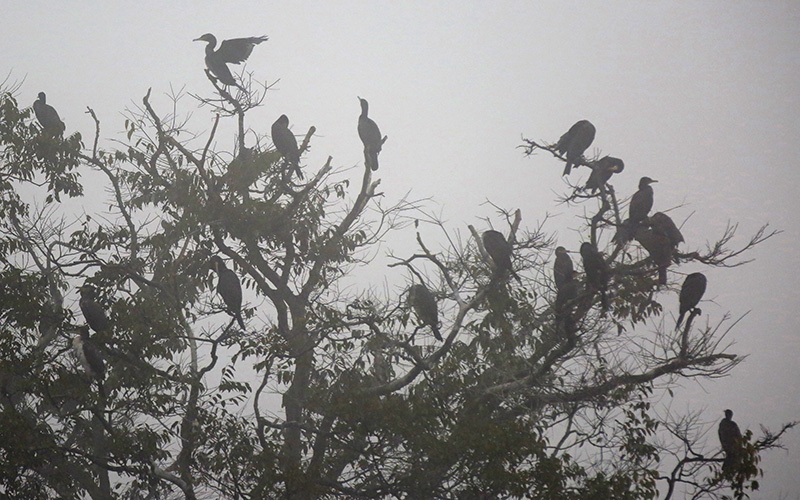 Migratory birds hang on tree branches on a misty morning at Taudaha Lake in Kathmandu on Thursday, December 29, 2016. Photo: Skanda Gautam/ File
Mirgratory birds have lost their habitat due to rapid urbanisation

Kathmandu, September 16 Though the northern migratory birds have been arriving in Nepal’s wetlands of the Tarai since August, Kathmandu Valley is yet to witness any migratory bird. Earlier, more than two decades ago one could see different species of northern migratory birds during mid-September in the Valley, among others. But, ornithologists claim that due to rapid urbanisation in the Valley these birds have lost their natural habitat. As a result, 70 per cent migratory birds have disappeared in the last 27 years. “In 1990, hundreds of migratory birds flocked river corridors of Kathmandu Valley, rice fields and Taudaha area, among other places, but nowadays migratory birds seem to have moved to the Tarai region,” added ornithologist Hemsagar Baral. He said now only a few bird species stay in the Valley to avoid severe cold in their countries of origin. “In comparison to 1990, approximately 70 per cent northern migratory birds have already disappeared from Kathmandu Valley and remaining 30 per cent also can be found in and around Taudaha only,” Baral further said, adding, “Habitat loss caused by development activities, deforestation and depletion of wetlands are the major causes for the disappearance of these birds.” It is said that three species of winter migratory birds are seen in the Tarai wetlands and many other species are expected to come to the region as winter sets in. Greenshank, greenshank piper and common shank piper can be easily seen in Tarai wetlands. With the arrival of these birds, Nepal is now expecting nearly 150 regular migratory birds from outside its geographical border. Ornithologist and Nepal’s Country Director of Zoological Society of London Baral said mid-September to mid-October was the peak migration time of birds and some birds reach Nepal even in November. Most of winter migratory birds come to Nepal from China, Mongolia, Korea, Siberian region of Russia and central Asia. During this autumn migration, some special birds pass through Nepal. One of these is the highest flying bar-headed goose which is known to cross the Himalayas on its journey to and from its summer and winter quarters. Similarly, duck species like ruddyshel, mallard, gadwall, common teal, northern pintail, woodsand piper, greenshank, thrushes, fly catcher, leaf wabblers, among others, come to Nepal to avoid excessive cold. Baral said 50 per cent of summer birds have returned to their countries of origin.
#Kathmandu Valley #Nepal's wetlands of the Tarai #Migratory bird #ornithologists Zoological Society of London
You May Also like: