8,000 street lamps to be installed in KMC 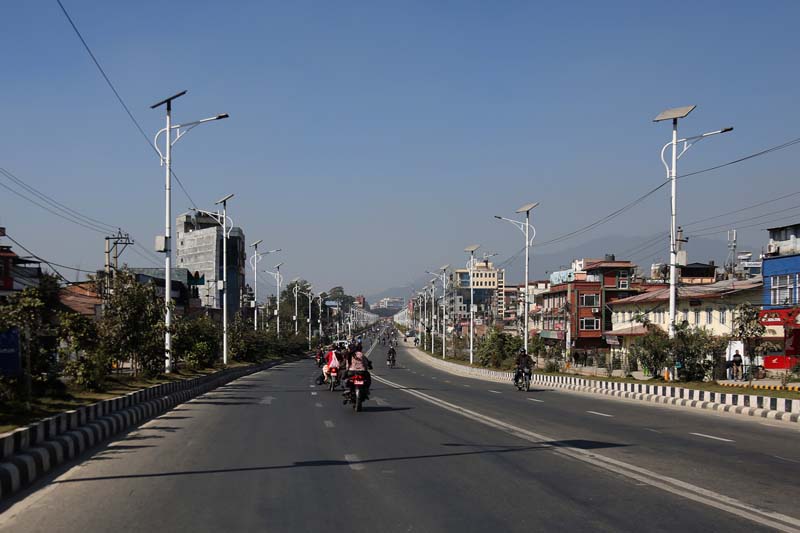 FILE: Few vehicles are seen plying on a road in Kathmandu Valley as the Netra Bikram Chand-led CPN Maoist imposed a Nepal bandh, on Sunday, November 13, 2016. Photo: RSS
KATHMANDU: The Kathmandu Metropolitan City (KMC) is all set to install at least 8,000 street lights at major road sections in the metropolis. The light installation will start from next month and is expected to be complete in five months, said KMC's spokesperson Ishwor Man Dangol. The lights will be set up along Kalanki-Airport, Tripureshwor-Chakrapath and Thapathali-Kamalpokhari roads. The metropolis has set aside Rs 50 million for the project for the current fiscal year 2018/19. "A total of 16,000 street lights have been demanded for all wards. It will cost between Rs 100 to150 million for the project," said Dangol. The light installation will facilitate people's movement at night and is expected to minimise road accidents and robberies, he added. Likewise, the Metropolitan Police Range, Kathmandu is preparing to install CCTV cameras in the metropolis. KMC has released Rs 30 million for the project, said police, adding that the CCTV camera installation would help maintain peace and security, reduce robberies and road accidents, manage footpath and reduce pollution.
#Kathmandu Metropolitan City #CCTV cameras #street lights
You May Also like: