Commission likely for resolving issue of boundaries of federal units 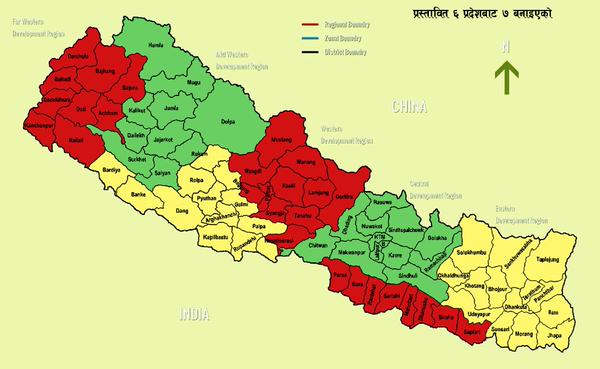 A map of seven-Pradesh model that the major parties prepared.
Kathmandu, September 12 Leaders of Nepali Congress, CPN-UML and Unified CPN-Maoist are preparing to move ahead with the voting process on the final bill of the constitution by taking steps to settle the issue of boundaries of federal units through a federal commission. The three-party meeting scheduled for tomorrow will decide, according to sources. Even if agreement is not reached with the agitating parties by tomorrow, the voting process will move ahead, said NC negotiator Narahari Acharya. “If parties agree on contents of the constitution after the voting process begins, the new agreement can be incorporated through amendment to the constitution after the statute is promulgated,” said Acharya. READ ALSO: CA voting process to start Informal meetings are being held mainly with Federal Socialist Forum-Nepal led by Upendra Yadav and Madhesi Janadhikar Forum-Democratic Chairman Bijay Kumar Gachhadar. MJF-D is more positive about joining or cooperating with the remaining process in the CA, according to Acharya. “Informal talks with Gachhadar were positive. We proposed to settle the issue of boundaries of federal units through commission to address the concerns of all agitating sides. He said he would reply by tomorrow morning. We are very hopeful that MJF-D will join or cooperate with the voting process,” Acharya said. UCPN-M Chair Pushpa Kamal Dahal told his party’s CA members at the parliamentary party meeting in Singha Durbar that the voting process would move ahead tomorrow. “Even if consensus is not forged by tomorrow, the CA’s process will move ahead and the issues of agitating parties will be addressed through amendment to the constitution,” said Dahal. The meeting urged the government to withdraw army mobilisation from riot-hit areas and requested both the government and agitating parties to stop violent activities, said Pokharel. Dahal also requested the party’s CA members, who have tabled separate amendment proposals, to withdraw them until the major parties agree to move any of the proposals to address the concerns of agitating parties before the voting process begins, according to Pokharel. UML Chief Whip Agni Prasad Kharel said that the CA will move ahead with the voting process tomorrow as scheduled. NC and UML leaders held informal talks with Tarai Madhes Democratic Party Chairman Mahantha Thakur this evening. However, no tangible progress was reported. Sadbhawana Party Chairman Rajendra Mahato said the government was inciting the agitation in the Tarai instead of creating atmosphere for talks. “There is no possibility of talks till tomorrow,” he said.
#federalism #Federal Commission #Army mobilisation #Pradesh boundaries #final voting process #final bill of constitution #boundaries of federal units
You May Also like: