Dependents of Kabul attack victims to get compensation 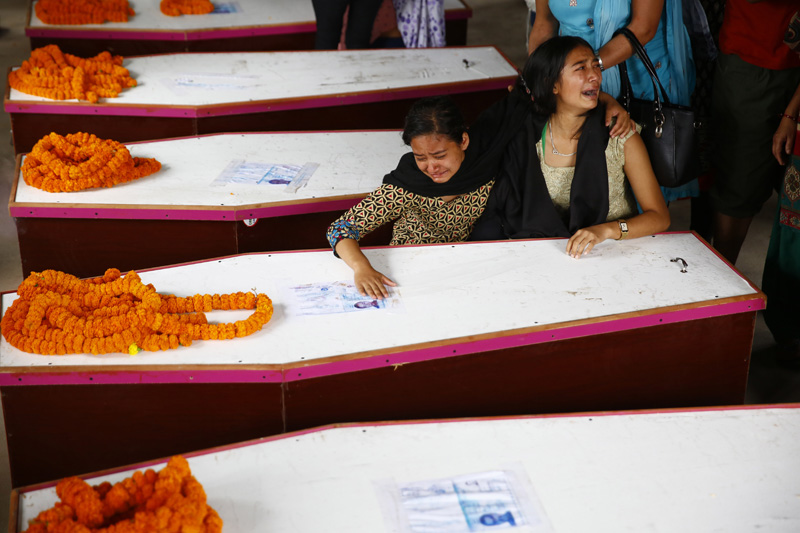 Daughters of one of the 12 victims who were killed in a suicide attack in Kabul grieving over his coffin at Tribhuvan International Airport, Kathmandu, on Wednesday, June 22, 2016. Photo: THT

Families of each of the Kabul attack victims will get at least US$ 30,000 in compensation from Sabre International, a British security consultancy firm that had hired all the 13 ill-fated Nepali security guards killed in the suicide bomb attack in Afghanistan on June 20.

The amount will be provided as per a job contract between Sabre International and the victims, according to Bharat Raj Paudyal, spokesperson for the Ministry of Foreign Affairs. “As far as we know, the consultancy firm has already begun the process of providing compensation to the victims,” he said.

An official, however, said the government was seeking more compensation as the Nepali security guards were killed partly because of security negligence by the employer as well as the Canadian Embassy in Kabul, where they used to work as security guards.

Separately, Nepal has urged the Canadian government to provide financial support to the dependents of the deceased and the injured on humanitarian grounds. Paudyal said the government was yet to get any response from the Canadian side.

Meanwhile, several security consultancy firms, including Sabre International, that have hired Nepali nationals as security guards for foreign diplomatic missions in Afghanistan, have started ferrying them on armoured vehicles.

Some have made arrangements for security guards to stay on the premises of the diplomatic missions, according to Tirtha Raj Aryal, Charge d’Affaires of Nepal to Pakistan, who concurrently looks after Afghanistan.