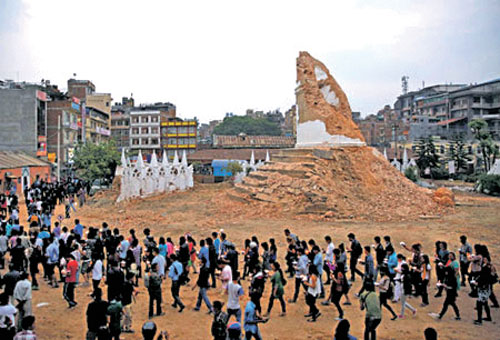 A file photo of Dharahara, which collapsed after the April 25 earthquake. Photo: THT

KATHMANDU: The Department of Archaeology (DoA) has estimated that the reconstruction of the Dharahara landmark would cost Rs 2.80 billion.

A research report on the reconstruction of the landmark shows that its location will be spread over 42 ropanis of land with the tower itself standing 245 feet. There will be a garden and an underground parking for the visitors.

The Department's Director General Bhesh Narayan Dahal said the report will be presented to the Nepal Telecom within a week. The Telecom will build the tower based on the report.

The centuries-old historic monument had collapsed in the devastating earthquake on April 25, 2015.