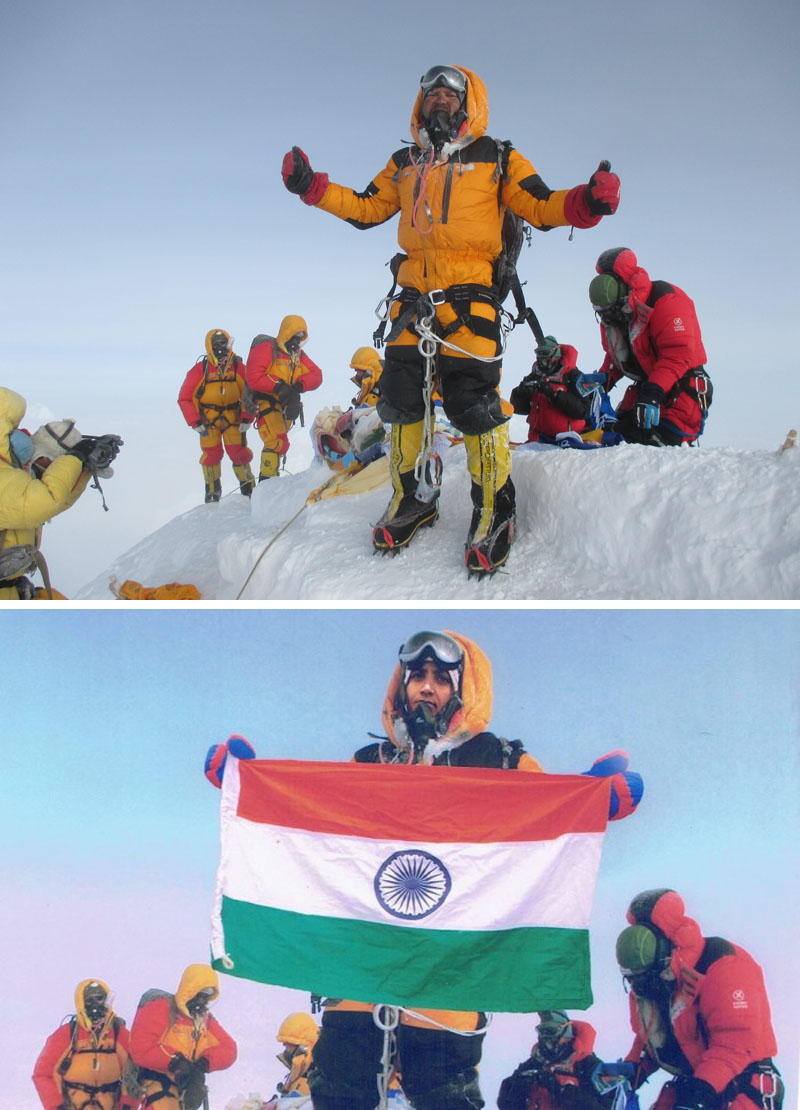 The photo below, which was submitted by Tarkeshwari Chandrakant Bhelerao to the department of Tourism, appears to be a morphed version of the one submitted by Satyarup (top). Pune Police has ordered an inquiry into the complaint. Photo: THT

Climbing Sherpas were not present at the Department of Tourism under the Ministry of Culture, Tourism and Civil Aviation when government officials issued summit certificates to an Indian police couple after approving their ‘morphed’ photos, it has been revealed.

According to a senior officer at DoT, the department had not consulted the climbing Sherpas — Furba from Sankhuwasabha and Fursemba from Solukhumbu who accompanied Dinesh Chandrakant Rathod and his wife Tarkeshwari Chandrakant Bhelerao of Maharashtra to the world highest peak last month, before awarding them summit certificates on June 10.

Mohan Lamsal, managing director at Makalu Adventure Treks that organised the expedition for the Rathods, also confirmed that Furba and Fursemba were not present during DoT’s debriefing while officials verified the couple’s claims.

As per the mountaineering regulation, the liaison officer submits a detailed report on expeditions and the DoT records statements from expedition members as well as their climbing Sherpas to verify their claims.

The DoT awards the expedition members with summit certificates only after recording multiple statements and verifying summit evidences, including photographs.

The police couple accompanied by Makalu Adventure representatives submitted the photographs while their liaison officer had filled a standard form as a formality, an officer said.

The photo below, which was submitted by Tarkeshwari Chandrakant Bhelerao to the department of Tourism, appears to be a morphed version of the one submitted by Satyarup (top). Pune Police has ordered an inquiry into the complaint. Photo: THT

Both Sherpas are not seen in the summit photos presented by the Rathods. According to Lamsal, they were not in contact with his company in recent days. “Their phones remained switched-off,” he said. “It’s not an issue with the Sherpas as DoT issued certificates to the Rathods only after verifying their claims,” Lamsal defended.

The photos submitted by the Rathod couple to DoT as proof were found highly suspicious as Satyarup Siddhantha, a climber from Bangalore, accused the Rathods of morphing their summit photos. “Satyarup summited Mt Everest on May 21 while the Rathod couple claimed to have reached the summit on May 23,” stated the DoT record. A group of climbers also lodged complaint against the Rathods with Maharashtra police.

The DoT would also write to the Rathods and expedition organiser to reconfirm their claims, an officer said, adding that if their claims were found fake, DoT could revoke the company’s licence, cancel summit certificates and impose a restriction on the climbers from coming to Nepal for mountaineering expeditions.

“The ministry may cancel the travel order and may return the facilities received by the liaison officer, if he/she does not accompany the expedition team and stay at the base camp during the entire expedition period,” he added.

#Ministry of Culture #Tourism and Civil Aviation #Mt Everest #Department of Tourism #Sherpas #mountaineering expeditions
You May Also like: