Drug smuggling, abuse on the rise 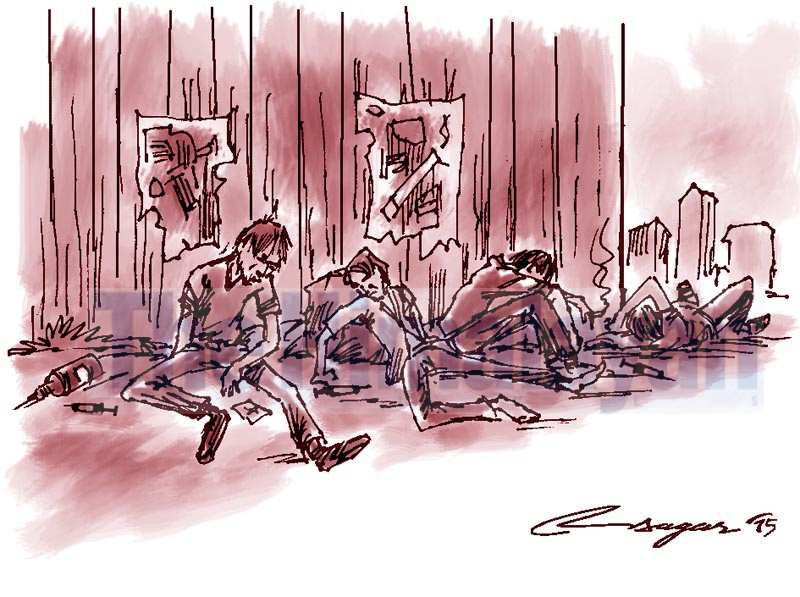 Illustration: Ratna Sagar Shrestha/ THT
Kathmandu, May 6 Cases of illegal drug dealings and abuse are increasing at an alarming rate across the country. In the first four months of the current fiscal, police arrested 2,010 persons on the charge of drug smuggling and drug abuse from various parts of the country. Last year, police had arrested 4,488 persons on the same charges. Police have estimated that by the end of this fiscal, the number might reach 5,000. In 2014, police had arrested 2,918 persons for illegal drug smuggling. In the year 2015, 2016 and 2017, police had made 2,756, 3,696 and 3,941 arrests respectively. In the last five years, the country has seen 42 per cent increase in the number of drug peddlers and drug addicts. A total of 19,809 drug peddlers and substance users have been held by police since 2014. Of the total arrestees, 14,545 persons were drug peddlers while others were people involved in drug abuse. The Narcotic Drug (Control) Act clearly states that drug abuse is also a punishable crime. According to police, even some foreigners are also involved in smuggling illegal drugs. A total of 139 foreigners were arrested for trafficking illicit drugs in 2016 while the number was 159 in 2017, 167 in 2018 and 78 foreigners have already been arrested in the first four months of the current fiscal. Data show that the number foreigners actively involved in drug peddling is also increasing. Of the total foreigners arrested on charges of drug peddling and drug abuse, 25 per cent are females. Most of the drug smugglers were arrested with cannabis, hashish, heroin, opium, cocaine and controlled pharmaceutical drugs. In the first four months of the current fiscal, police confiscated 5,766 kilogram of cannabis, 2,057 kg hashish and three kg heroin, which is again the largest quantity of drugs police seized in a year. Superintendent of Police Krishna Prasai at Narcotics Control Bureau said almost 90 per cent of heinous crimes such as rape and murder have direct link with drug abuse. He also said that drug related offences were increasing at an alarming rate in the country. SP Prasai also informed that drugs like cannabis and hashish were largely smuggled to foreign countries, while Nepali youths were found misusing pharmaceutical drugs as these drugs were easily accessible and affordable.
#drug smuggling #drug abuse #Illegal drug dealing
You May Also like: