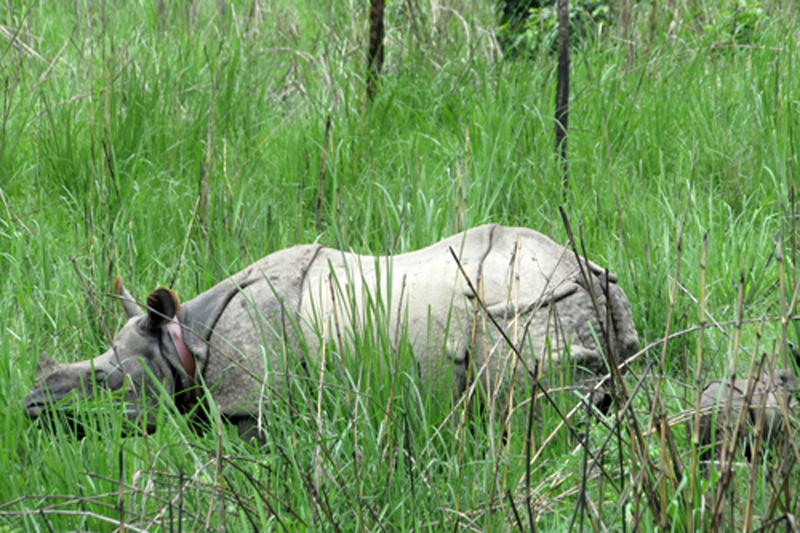 A one-horned rhinoceros, along with its newly born calf, grazes in the field of Guthi area in Babai Valley on Tuesday, June 21, 2016. The rhino was translocated to the Bardiya National Park from the Chitwan National Park on March 5, 2016. Photo: RSS
Kathmandu, August 7 The government has begun the process of gifting two pairs of endangered one-horned rhinoceros nearly a month after the Cabinet took a decision to this effect. The Cabinet had decided to gift two pairs of one-horned rhinoceros to China on July 10. According to the Ministry of Forest and Soil Conservation, it has already received an official email from the State Forestry Administration of China, inviting Nepali conservation officials to look for a proper habitat for the rhinoceros. The Nepali team has been invited to inspect rhino habitats in Shanghai, Hangzhou and nearby areas from August 15 to 21. “The official process of gifting rhinoceros to China has begun officially with the invitation of the State Forestry Administration of China,” said Ishwori Paudel, under secretary at Foreign Aid Coordination Division, MoFSC. Though the invitation has been forwarded to the concerned agency, Department of National Park and Wildlife Conservation and the concerned authorities have yet to finalise the team to be sent to China for the observation visit. Representatives from the concerned ministry and department, among others, should be included in the team as gifting of endangered animals falls under the Convention on International Trade in Endangered Species of Wild Fauna and Flora. Although the date fixed for the observation visit approaching nearer, the ministry and DNPWC failed to finalise the names of officials today. Paudel said that the government was likely to finalise the names tomorrow. According to Co-spokesperson for the ministry Yajna Nath Dahal, the Chinese invitation to Nepali officials to look for rhino habitats in China was beginning of the whole process. After the habitat identification, various technical formalities have to be fulfilled. Deputy Director General at DNPWC Dr Maheshwor Dhakal said four rhinoceros would be picked from the Chitwan National Park to be gifted to China. As per the 2015 census, there are a total of 645 rhinos in Nepal. Of them, 605 are in Chitwan National Park alone. During the China visit of former forest minister Agni Sapkota in January, then prime minister KP Sharma Oli issued instructions to forward the process of gifting one-horned rhinoceros to China. Chinese Forest Minister Zhang Jianlong and other Chinese officials had requested the Nepali side to gift the rhinos. According to conservationists, gifting of the rhinos to China would open the process for future collaboration in wildlife conservation between the two countries. It is the first time since 2007 that the government of Nepal has decided to gift wild animals to other countries. Earlier, National Trust for Nature Conservation used to gift wild animals to various countries. Rhinoceros unicornis is classified by the IUCN Red List of Threatened Species as endangered — a category belonging to animals facing a very high risk of extinction.
#Ministry of Forest and Soil Conservation #National Trust for Nature Conservation #Chitwan National Park #one-horned rhinoceros
You May Also like: