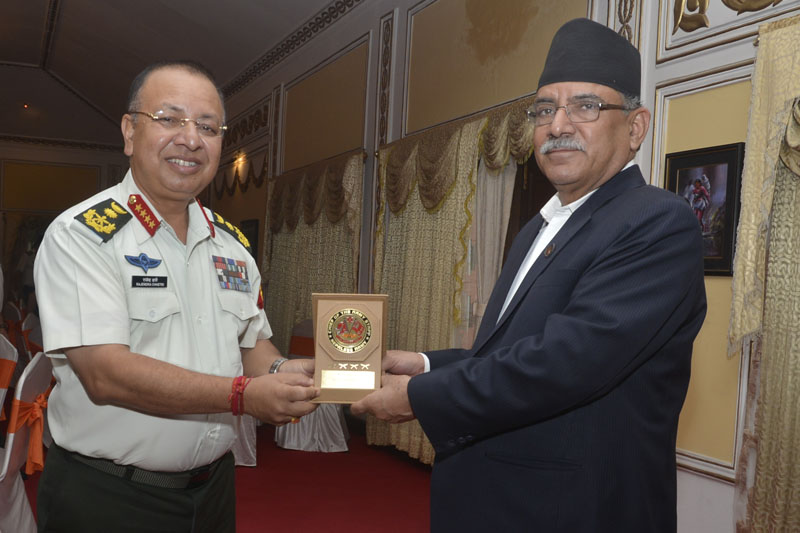 Chief of Army Staff Rajendra Chhetri (left) presents a gift to Prime Minister Pushpa Kamal Dahal as the latter visits the Nepal Army headquarters, in Kathmandu, on Sunday, October 2, 2016. Photo: PM's Secretariat
KATHMANDU: Prime Minister Pushpa Kamal Dahal said the government and the Nepal Army share the same opinion about concluding the peace process. While inspecting the Army Headquarters in Kathmandu today, the Prime Minister said the government was conscious and determined that the national army should not be dragged into conflict-era cases. The Prime Minister added that the government was committed to boosting willpower of the army personnel and equipping them with resources, according to a statement issued by the PM's Secretariat. "Those who have participated in a war have a better understanding of the significance of peace," the then commander of the rebel army said, "I have a high respect to the positive contribution the Nepal Army made to the Nepali peace process." Meanwhile, the Prime Minister lauded the NA for its contribution to the world peace as well. "Nepal is known in the world for integrity, loyalty, courage and bravery of its army," he said, "I want to express my gratitude to you for this." On the occasion, Chief of Army Staff Rajendra Chhetri said the national army was a professional and apolitical institution and would remain the same in the future,  according to a statement issued by the NA Directorate of Public Relations. During the visit, senior army officials had briefed the Prime Minister about activities of their departments. The Prime Minister was accompanied by Deputy Prime Minister duo Bimalendra Nidhi and Krishna Bahadur Mahara, Minister for Physical Infrastructure and Transport Ramesh Lekhak, Minister for Energy Janardan Sharma, Minister for Defence Balkrishna Khand, Minister for Forests and Soil Conservation Shankar Bhandari, Chief Secretary Som Lal Subedi, Defence Secretary Shreedhar Sapkota as well as senior officials of the Office of the Prime Minister and Council of Ministers and the Ministry of Defence.
#Nepal Army #Pushpa Kamal Dahal #Conflict-era issues #Rajendra Chhetri #peace process #transitional justice
You May Also like: