Govt told to keep roads in the Valley dust-free 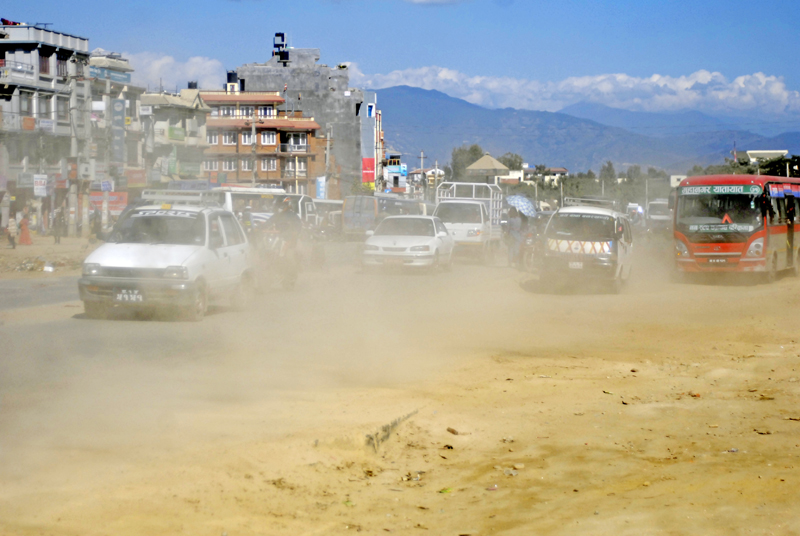 Vehicles passing through a badly damaged road section of Ring Road, at Satdobato, Lalitpur, on Thursday, November 3, 2016. Photo: THT
Kathmandu, February 3 The Development Committee of the Parliament today expressed strong concern about hazards of dust pollution to the public due to haphazard and unsystematic construction activities in the Kathmandu Valley. Unplanned digging of roads, long delay in repairing roads, haphazard dumping of construction materials, laying of utility pipes of the Melamchi Drinking Water Project, among other things, are responsible for increasing dust pollution in the Valley. Pedestrians and people living in roadside houses have been hit the worst. Following a discussion on dust hazards to the public, Rabindra Adhikari, chairperson of the Development Committee, directed the Ministry of Physical Infrastructure and Transport, the Ministry of Water Supply and Sanitation, Department of Roads, and the Project Implementation Directorate of Kathmandu Upatyaka Khanepani Limited overseeing the Melamchi Water Supply Project to purchase and operate more hydraulic broomer machines to keep roads dust-free. The committee has directed them to refill trenches immediately. The directorate has deputed over 1,200 workers in 40 places of the Valley simultaneously to dig roads and sidewalks for the drinking water project. Project director Tiresh Prasad Khatri conceded that the public had been suffering from dust pollution. The project has been laying pipes along 50km stretch every month and is expected to complete the work by September. Devendra Karki, director general at the DoR, informed that the directorate had provided it with a budget of Rs 850 million to black-top the surface of dug-up stretches of roads after laying the pipes. Hospitals report the number of patients with respiratory problems has increased by over 20 per cent in Valley in recent months. They said long exposure to dust was responsible for rise in the number of people suffering from respiratory problems, heart ailments, lung disorders, allergic rhinitis, allergic asthma, bronchial asthma, coughing, wheezing and shortness of breath.
#Kathmandu Valley #Development Committee #parliament #Melamchi Drinking Water Project #Kathmandu Upatyaka Khanepani Limited #Dust Pollution #unsystematic construction
You May Also like: