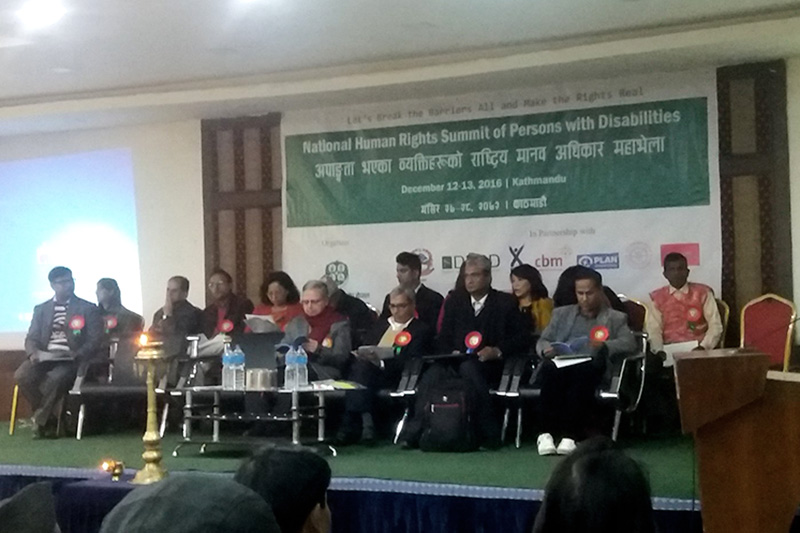 Dignitaries attend the National Human Rights Summit of Persons with Disabilities conference organised by the National Federation of Disabled-Nepal (NFD-N) in Kathmandu, on Monday, December 12, 2016. Photo: Monica Lohani
KATHMANDU: The National Federation of Disabled-Nepal (NFD-N) has organised a two-day National Human Rights Summit of Persons with Disabilities at the United World Trade Centre in Kathmandu from Monday. The event was inaugurated by Chairperson of the National Human Rights Commission, Anup Raj Sharma. Speaking at the event, Sharma, the chief of the function, highlighted the need of adopting disabilities-inclusive policy to ensure that people with disabilities (PWDs) are not left behind. “The perception towards people with disabilities is still not friendly in our country. The government should work more to implement the Constitution and make it friendly towards them,” he said. Similarly, NFD-N President Shudarson Subedi recalled how people with disabilities had struggled to obtain their rights in the newly promulgated Constitution. "However, the struggle has not borne any fruits as implementation of the disabled-friendly Constitution is still a far cry." Meanwhile, Subedi, who was presiding over the event, also announced an ambitious 18-month nationwide campaign to bring the burning issues of PWDs. The campaign would start from March next year. During the summit, four pairs of different parallel sessions in various topics to discuss on the possibilities, challenges and opportunities to people with disabilities. In the event, NFD-N General Secretary Raju Basnet said that people who do not have disabilities should understand the feelings of differently-able people. “Otherwise, their voices will be unheard and goes unnoticed.” Representatives of the government agencies and other stakeholders were also present at the event.
#NHRC Chair Anup Raj Sharma #differently-abled #differently-able people #Anup Raj Sharma #disabled-friendly #Shudarson Subedi #National Federation of Disabled-Nepal (NFDN) #Nepali constitution #National Human Rights Summit of Persons with Disabilities
You May Also like: