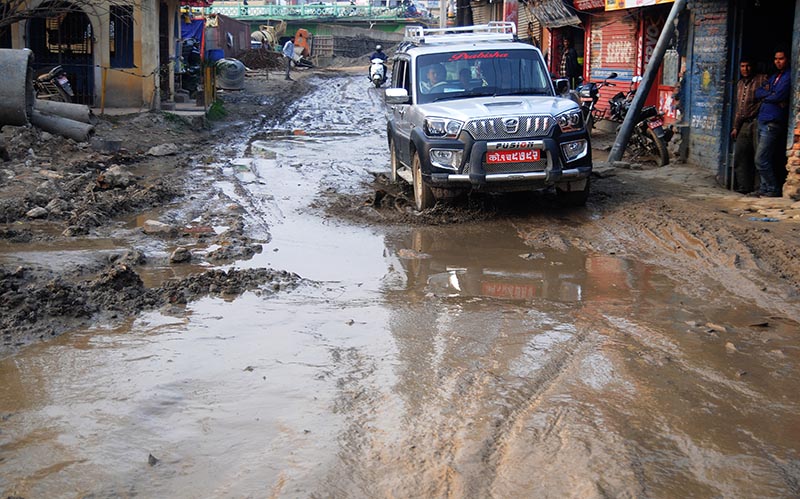 Vehicles passing through a muddy road in Buddhanagar, Kathmandu, on Thursday, March 30, 2017. Delay in upgradation of roads in the Valley has caused inconvenience to public. Photo: Balkrishna Thapa Chhetry/THT
Kathmandu, March 30 A group led by Valley Road Expansion Victim Struggle Committee today staged demonstrations against the road widening campaign under way in various parts of Kathmandu Valley. The demonstrators claimed that the government was demolishing houses rampantly without paying any compensation. They have demanded proper compensation as well as resettlement of locals affected by the road widening drive. The group also took out a rally from Maitighar Mandala to Bijulibazaar. Although the road widening campaign began from 2011, major road sections of the Valley have yet to be expanded. According to Central Regional Road Directorate of Department of Roads, the expansion process has yet to begin along Nagdhunga-Kalanki, Jorpati-Sankhu, Gwarko-Imadol-Lubhu and Dholahiti-Sunakothi-Chapagaun road stretches. The government had set the deadline of July 2017 to complete road expansion in the Valley. According to CRRD Director Ayodhya Prasad Shrestha, only 25 per cent of the road expansion process has been completed so far due to obstruction from locals and various agencies. Kathmandu Valley Development Authority, another agency responsible for the road widening drive, said road expansion had become more difficult with the emergence of new local leaders. Another responsible authority for road widening, Kathmandu Valley Development Authority, said road widening efforts were also being obstructed by local leaders. KVDA said about 300 km roads had been widened so far, while more than 200 km roads have yet to be upgraded. Locals of Kalimati, Soltimod, Teku, Naikap, Satungal and Thankot are strongly protesting the road widening drive, demanding proper compensation. The locals have also filed cases against the drive. The Kathmandu Valley Road Improvement Project had resumed expansion of 53 kilometres of road segments in Kathmandu Valley in July last year. The project had started widening Tripureshwor-Kalanki, Chabahil-Jorpati-Sankhu, Jorpati-Sundarijal, Lagankhel-Satdobato, Imadol-Siddhipur-Godawari, Karmanasa-Harisiddhi, Dholahiti-Sunakothi-Chapagaun and Nakkhu-Bhaisepati-Bungamati stretches. The Kathmandu Metropolitan City has been receiving continuous complaints of dust pollution and problems of potholes from the various part of the Valley due to delay in expansion of various road stretches. Earlier, the Development Committee of the Parliament had directed the government to complete upgradation of road sections in Kathmandu Valley by the end of the current fiscal. During the meeting of the committee, parliamentarians had expressed dissatisfaction with the pace of road expansion work in Kathmandu Valley.
#Kathmandu Valley #Valley Road Expansion Victim Struggle Committee #Kathmandu valley Valley Road Expansion #road widening campaign
You May Also like: