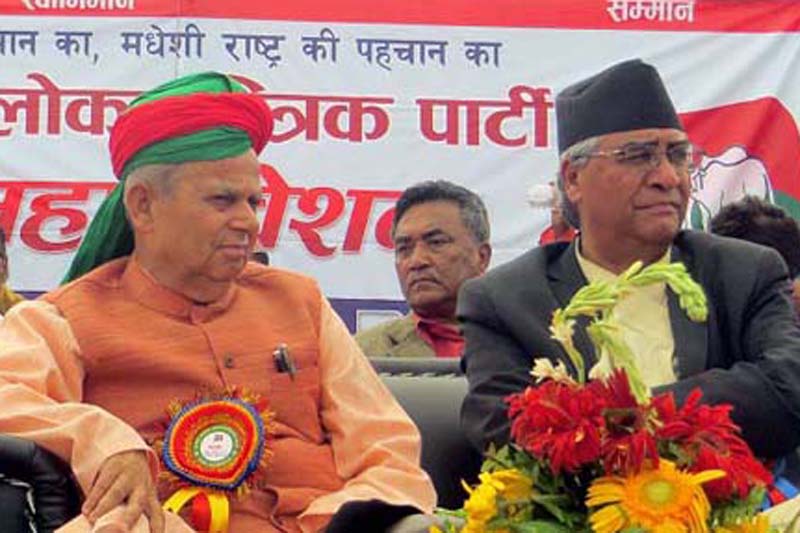 FILE: Tarai Madhes Democratic Party (TMDP) Chairman Mahantha Thakur (left) and Nepali Congress President Sher Bahadur Deuba take part in the first general convention of the TMDP, in Nawalparasi district, on Monday, June 20, 2016. Photo: Shreeram Sigdel
KATHMANDU: Nepali Congress President Sher Bahadur Deuba on Sunday requested Tarai Madhes Democratic Party Chairman Mahantha Thakur to withdraw the ultimatum that the United Democratic Madhesi Front had issued with a warning of withdrawing support extended to the government. Thakur, however, rejected the call demanding the government revise the new local level structure. As the seven-day ultimatum issued by the agitating bloc was approaching its end, the ruling coalition's key leader had called Thakur at his Budhanilakantha residence and asked him to withdraw the warning, claiming he would take initiatives to get the Constitution amendment endorsed as demanded by the UDMF. Thakur, however, said the endorsement was not enough to convince the UDMF and no poll could be held unless the new local level structure which came into effect on Friday was revised. "We cannot withdraw the ultimatum as it will be impossible for us to accept the polls unless the structure is revised," Thakur told THT Online after the meeting. The agitating Madhes-centric parties have been claiming that the new structure was not based on the population density and fewer local bodies had been created in the Tarai region strategically, in order to downsize the representation of Madhesis in the state system. During the meeting, Deuba had justified that the present ruling coalition was formed to meet the need of the time and it should not break apart on any pretext. "Please do not withdraw the support [extended to the government] as I would work further to ensure the Constitution amendment," NC leader Farmullah Mansur, who was present at the meeting, quoted Deuba as telling the TMDP Chair. Deputy Prime Minister and NC leader Bimalendra Nidhi was also present at the meeting.
#Nepali Congress #Tarai Madhes Democratic Party #Sher Bahadur Deuba #Bimalendra Nidhi #Mahantha Thakur #NC-TMDP meeting #TMDP #constitution amendment #Farmullah Mansur #Local level structure
You May Also like: