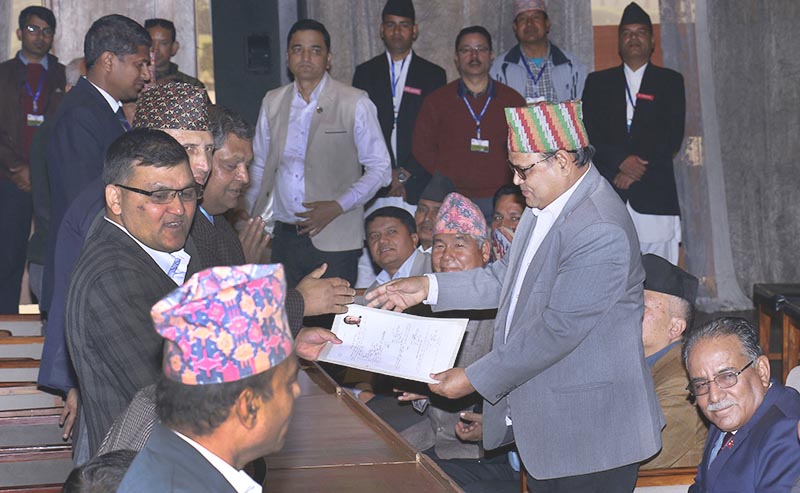 KATHMANDU: Senior CPN-Maoist Centre leader and lawmaker Krishna Bahadur Mahara was today elected the speaker of the House of Representatives unopposed, as he was the only candidate who filed nomination for the post.

Deputy Spokesperson for the Parliament Secretariat Keshav Raj Aryal said the next House meeting slated for 1:00pm tomorrow would announce Mahara’s election to the post. He said the senior-most HoR member, who chairs the House meeting, would allot time to proposer and seconder of Mahara’s candidacy to address the House briefly before announcing the result.

CPN-MC Chair Pushpa Kamal Dahal and senior UML leader Bishnu Paudel were present at the time of filing of the nomination. A meeting of the CPN-MC held this morning decided on Mahara’s name for the speaker’s post.

Talking to mediapersons after filing his nomination papers, Mahara said he would play a constructive role in the implementation of the new constitution.

Meanwhile, the Nepali Congress decided not to contest the speaker’s post. NC Spokesperson Bishwa Prakash Sharma said, “We hope Mahara’s neutral behaviour will boost the dignity of the House.”

He added that the NC had not yet decided on contesting the deputy speaker’s post.

The NC is of the view that deputy speaker should not be from the left alliance.

Senior CPN-MC leader Krishna Bahadur Mahara, who hails from Rolpa district, a Maoist stronghold, was elected from Dang-2 in the parliamentary election held on December 7. Mahara was also elected in the first and second Constituent Assembly elections held in 2008 and 2013. He was appointed interim lawmaker after the 2006 popular movement and became minister of information and communications in the government led by the late NC president Girija Prasad Koirala immediately after the popular movement. He got the same portfolio in the Pushpa Kamal Dahal-led government after the first CA election. Mahara was home minister in the Jhalanath Khanal-led government.

Mahara was appointed deputy prime minister and finance minister in the Dahal-led government formed in August 2016.

He became DPM and foreign affairs minister in the Sher Bahadur Deuba-led government.

Mahara, who was a school teacher before joining active politics, was elected to the House of Representatives for the first time the 1991 general election. He went into hiding after the CPN-MC launched a guerilla war in 1996.

Mahara elected unopposed to post of Speaker of House of Representatives

KATHMANDU: CPN Maoist Centre leader Krishna Bahadur Mahara has been elected the Speaker of the House of Representatives, the lower house of the bicameral federal parliament of Nepal.

Mahara was elected unopposed being the only candidate for the post, as stated by the Federal Parliament Secretariat.

However, an official announcement about it will take place at a meeting of the House of Representatives scheduled for tomorrow.

Earlier today, Mahara visited the New Baneshwor-based Federal Parliament Building — where the Office of Election Officer is based — to register his candidacy that was supported by CPN-UML leader and former Speaker Subash Chandra Nembang, and seconded by Maoist Centre leader Dev Gurung.

The main opposition Nepali Congress did not field any candidate on behalf of the party to vie for the post. The NC said it decided not to file the candidacy as it strongly believed that the Speaker of the House of Representatives should be elected unanimously.

As per the election schedule for the Speaker, the time for filing the candidacy was set between 10:00 am to 1:00 pm today.

(with inputs from Rastriya Samachar Samiti)