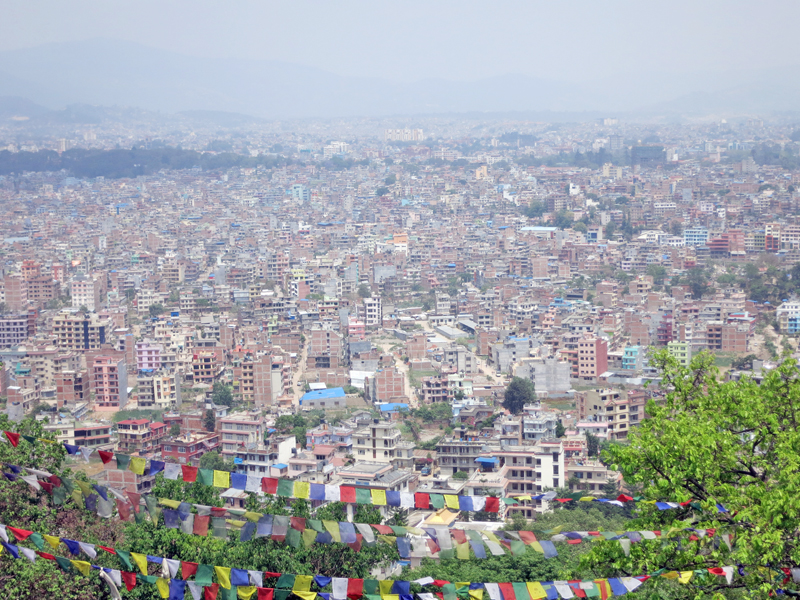 A magnificent view of Kathmandu as captured from Swayambhu on Monday, May 9, 2016. Photo: RSS
Kathmandu, October 13 Monsoon that entered Nepal on June 15 this year finally withdrew yesterday after a delay of 19 days. Normally, monsoon withdraws from Nepal on September 23. According to the Department of Hydrology and Meteorology, this is the fourth delayed withdrawal of monsoon from Nepal. The year 2013 saw the largest deviation from the set monsoon withdrawal date, with monsoon ending on October 19 that year. DHM’s Meteorological Forecasting Division officially announced today that monsoon had withdrawn from the western and central regions of Nepal and the condition was favourable for its withdrawal from rest of the country within a few days. “After the dominance of westerly wind, monsoon has finally withdrawn from Nepal after a delay of about three weeks,” Barun Paudel, meteorologist at the division told The Himalayan Times. “There is still a chance of light rain in the eastern parts of the country, including Taplejung and Okhaldhunga, for the next few days, while mid and western regions of the country will witness clear sunny days. Dominance of westerly wind will decrease the minimum temperature in the morning.” Earlier, meteorologists had predicted that monsoon would withdraw prior to Dashain. MFD said all meteorological stations have received normal mean precipitation throughout the nation. DHM receives data from meteorological stations in Dadeldhura, Dipayal, Dhangadi, Birendranagar, Nepalgunj, Jumla, Dang, Pokhara, Bhairahawa, Simara, Kathmandu, Okhaldhunga, Taplejung, Dhankuta and Biratnagar. In Nepal, monsoon season contributes an average of 79.8 per cent of the total annual precipitation of the country. Monsoon originates in the Bay of Bengal and moves along the southern flanks of the Himalayas, bringing rains to Nepal. Average annual rainfall in Nepal is 1,600 mm, but it varies from place to place depending on climate. Monsoon is the wettest season and is the main source of precipitation in Nepal. The effect of monsoon is prominent in the eastern part of the country. The northern and mid-western regions are generally drier compared to the eastern parts. The driest regions Mustang, Manang and Dolpa receive less than 150 mm of rainfall while the wettest region Kaski receives more than 4,500 mm rainfall during the monsoon season. This year monsoon had entered in Nepal on June 15. The country witnessed 29th delayed monsoon this year. A research carried out by Meteorological Forecasting Division by observing monsoon trends from 1981 to 2010 has suggested shifting the existing monsoon onset and withdrawal date by five days to make up for the deviations.
#Kathmandu Valley #Department of Hydrology and Meteorology #Meteorological Forecasting Division #monsoon rain
You May Also like: