Kathmandu, January 8 The government today deported 122 Chinese arrested on suspicion of financial and cybercrime to China on two aircraft sent by the Chinese government. A group of 42 Chinese was deported in Boeing 737 of China Eastern Airlines flight No MU 7176 at 6:23pm, while 80 left in Airbus 332 of China Southern Airlines flight number CZ 3002 at 7:40pm. Both the planes left for Kunming, the capital of Yunnan province in south-west China. Yesterday, human rights activists had raised eyebrows over the deportation, as they said authorities here had got no assurance from the Chinese authorities on the safety of those being sent back to their home country. 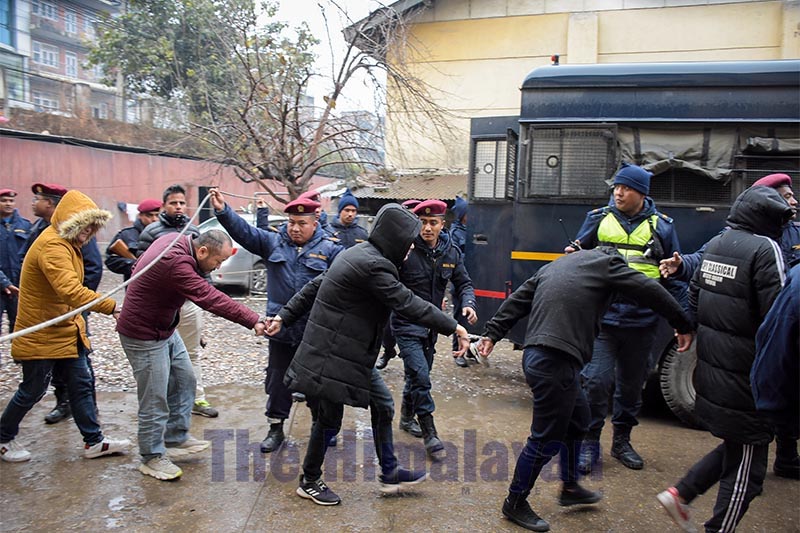 Detained Chinese nationals being taken to Tribhuvan International Airport for deportation to China, on Wednesday, January 8, 2020. Photo: Naresh Shrestha/THT
Department of Immigration, however, refutes the claim, saying they were just following regular deportation procedure under the existing rules, as those arrested were not charged or proven guilty of any serious crime. Eshwor Raj Poudel, director general of DoI, said, “The 122 Chinese were found guilty of indecent behaviour by the District Administration Office. Acting upon the verdict and complying with the immigration laws, we deported them.” The 122 Chinese were arrested on December 23 from nine houses in Kathmandu in a raid led by the Central Investigation Bureau of Nepal Police. Police arrested them on suspicion of cyber and financial crime, but they were later charged with indecent behaviour as they could not gather evidences to substantiate other charges. Chief District Officer of Kathmandu Janakraj Dahal set them free on January 5, slapping each of them a fine of Rs 1,000. Police then handed them over to the Department of Immigration in a bid to deport them. The DoI imposed a fine of Rs 1,000 each on 34 of those arrested with valid travel documents for engaging in activities restricted by Nepal’s immigration laws. Those who did not possess any travel document were fined Rs 2,000 each and were provided with travel documents by DoI to fly to China. All 122 of them have been banned from travelling to Nepal for four years. The arrest and deportation of the 122 Chinese is shrouded in mystery. Police had earlier claimed that they were arrested on suspicion of cyber and financial crime, but said later that they were being detained for not “acting like tourists” and engaging in activities barred by Nepal’s immigration laws. At a press conference organised three days after the arrest of the Chinese, the CIB said those arrested were involved in swindling money from rich, single and divorced women using online media. Other police sources said they were running an illegal online gambling racket, operating Ponzi scheme and blackmailing Chinese by hacking private information from their phones and computers. READ ALSO:
#Chinese arrested #Chinese deported #Arrested Chinese nationals #Deportation of Chinese nationals #Chinese detainees
You May Also like: