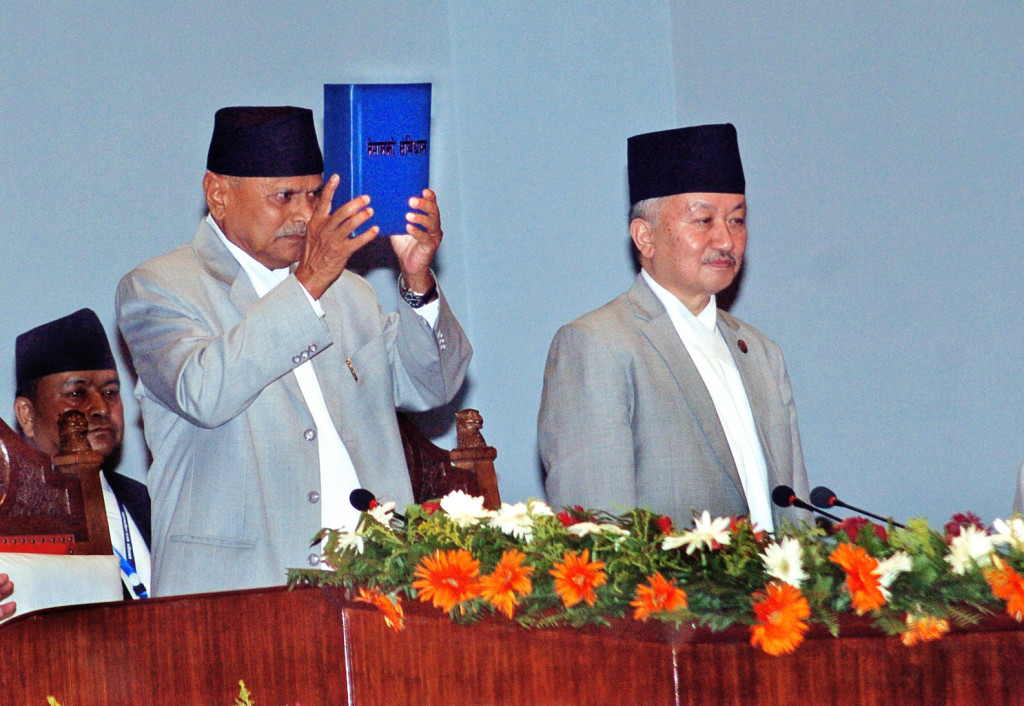 President Ram Baran Yadav promulgating Nepal’s Constitution after signing the copies of the constitution authenticated by CA Chairman Subas Chandra Nembang during a special function at the Constituent Assembly Hall on Sunday. Photo: Dhruba Ale/ THT
Kathmandu, September 20 Nepal’s decades-long wait for the new constitution through people’s representatives is over, as President Ram Baran Yadav today announced the commencement of new constitution during the Constituent Assembly meeting-cum-special function organised at the CA’s regular meeting venue. When CA Chairman Subas Chandra Nembang requested President Yadav to sign the designated page to proclaim the commencement of the new constitution, Yadav bowed his head to each of the five copies before signing them. He then read out the text: “I announce, before Nepali people, that the Nepal’s Constitution, endorsed by CA, authenticated by CA chairman and presented here, has commenced today -- 20 September 2015.” “Endorsed by people’s representatives, this constitution is the document of our common commitment for protecting freedom, geographic integrity, independence and sovereignty vested in people,” Yadav said in his speech when Nembang requested him for his address. The packed House of the CA applauded the President’s address by thumping the table. Yadav called on people of mountains, hills and Tarai-Madhes to protect and promote the people’s rights, achievements and the federal democratic republic structure and urged them to maintain mutual unity, tolerance, cooperation and harmony. “Constitution is a dynamic document. I request you to be continuously active towards its successful implementation for social justice, rights and prosperity,” he said.

President Ram Baran Yadav promulgating Nepal’s Constitution after signing the copies of the constitution authenticated by CA Chairman Subas Chandra Nembang during a special function at the Constituent Assembly Hall on Sunday. Photo: Dhruba Ale/ THT
Expressing his confidence that the new constitution would protect and promote Nepal’s ethnic, lingual, religious, cultural and geographic diversity, he said the new constitution had given an opportunity to strengthen unity in diversity and end discrimination and inequalities. “With the announcement of commencement of this constitution, federal democratic republican system has been institutionalised in our country. It has been established that only the people are the source of sovereignty vested in Nepali people and state power,” Yadav said. All subjects, including federalism, republican system and inclusive representation, will be widened and developed with the implementation of the new constitution, he said. “We believe that the country will speed towards sustainable peace, political stability and socio economic development,” Yadav said. The CA unanimously endorsed a vote of thanks to President Yadav for his announcement and address. After that CA Chairman Nembang informed the House that the CA had transformed to Parliament as per the new constitution. Nembang said, “We are delighted with the commencement of the new constitution, proving that we are independent citizens of independent country.” Stating that implementation of the constitution will be challenging, Nembang said, “The constitution is a descriptive document, as we tried to include the aspirations of most of the people.” Nembang said the political leadership should exhibit wisdom through its implementation. “The parties should continue their unity even in its implementation,” he said. The new constitution may still have its weaknesses and it may not be perfect but it has provided a foundation to amend it through democratic process, Nembang said. “It is not the end but the beginning of development of new constitution,” he said requesting those who have been boycotting the CA’s process to protect its achievements. Proclaimed in the name of Nepali people, the new constitution has 35 parts, 308 articles and nine schedules.
#new constitution #President Ram Baran Yadav #CA Chairman Subas Chandra Nembang #Tarai-Madhes #commencement of new constitution #democratic process
You May Also like: