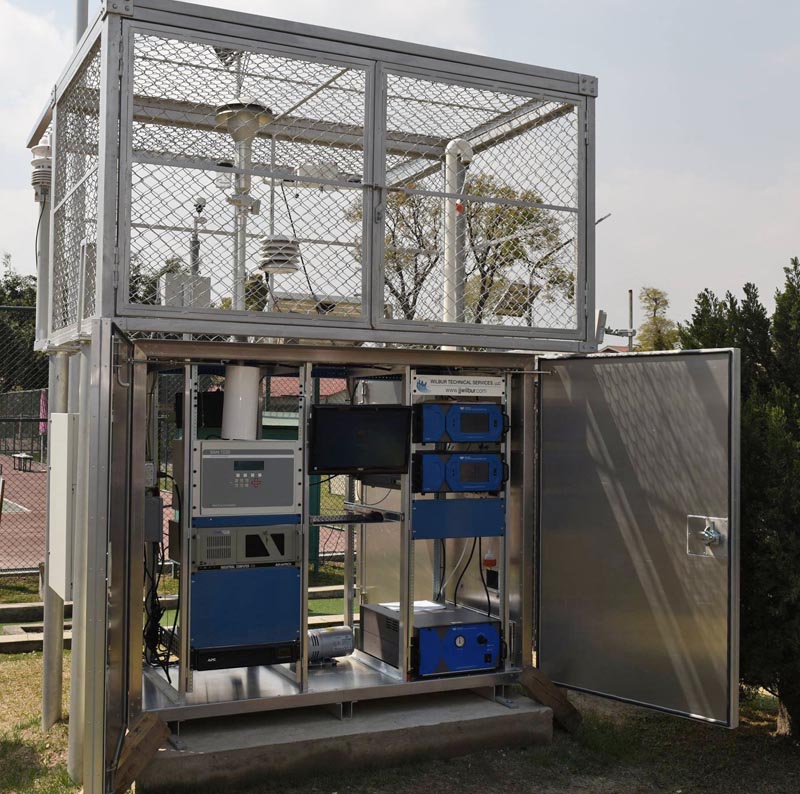 Air Quality Monitoring station at Ratnapark. Photo: US Embassy in Kathmandu
Kathmandu, March 20 The Ratna Park Air Quality Monitoring Station, which was officially set up on March 14 by the Ministry of Population and Environment, ran into problems in the past two days, affecting the measurement of dust particles. According to the ministry, the ‘filter saturation’ issue has been rectified after the filter was replaced this afternoon. “Although the station was inaugurated last week, the station has been functioning for the last seven months. So we had to replace the filter as we have been doing and it is now up and running again,” said Shankar Prasad Paudel, Senior Divisional Chemist of Department. The station, which came into operation on August 9, has been continuously measuring particulate matter concentration in the air. The filter, which is an essential part of the unit, collects dust particles for measurement of PM10 and PM2.5. The station has been sending data regularly to the central server since it began operation. The station measured dust particles, especially particulate matter (PM 10) and PM 2.5 in the air, levels of carbon monoxide, sulfur dioxide, nitrogen oxide and ozone in  the atmosphere. The station was on a total shutdown the week before its inauguration in order to disconnect it from the Ratna Park-based transformer. The practice of monitoring levels of air pollution in Nepal began in 2002 when the Danish government installed seven air quality measuring stations across the Valley. All the stations were shut down by 2009. Since 2008, the Nepali government entrusted the Environment and Public Health Organisation with managing the stations. A misunderstanding between the government and the ENPHO led to the closure of stations in 2009. The department is in the process of installing 56 stations throughout the country. The Ratna Park station was formally launched on March 14 by the Population and Environment Ministry’s Secretary Bishwonath Oli. The government’s official pollution data portal (www.pollution.gov.np) was also launched during the event. Besides the government-run air quality monitoring stations in Kathmandu, Nepal also has the the US Embassy Air Quality Monitor data, the most reliable air data agency of the United States Environmental Protection Agency. According to the Ministry of Population and Environment, the US embassy agreed to share the air data of Maharajgunj and Kantipath  based stations with them. During the  air quality monitoring station’s inauguration, the department’s Senior  Divisional Chemist Shankar Prasad Paudel signed an agreement that allowed  the sharing air quality data.
#PM2.5 #Ministry of Population and Environment #Environment and Public Health Organisation #Ratna Park air quality centre #Ratna Park Air Quality Monitoring Station #PM10
You May Also like: