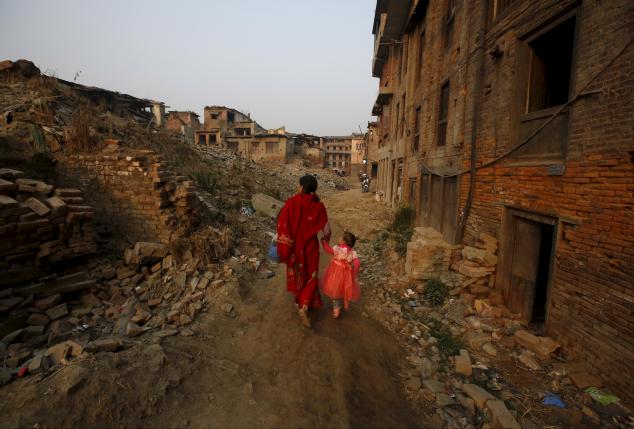 A woman and a child walk past the remains of collapsed houses damaged during the April 2015 earthquake, in Bhaktapur, Nepal March 18, 2016. REUTERS
KATHMANDU: Nepal Police's Central Investigation Bureau said on Wednesday it recently arrested two persons after receiving complaints that they embezzled millions of rupees collected for those affected by the Nepal earthquake from hundreds of international donors. Those arrested are identified as Buddhist Janadhikar Mancha's Chairman Sakun Sherchand (57) of Budhanilakantha-4, and General Secretary Amarkanta Chaudhary (35) of Pato, Saptari, the CIB said. The Buddhist Janadhikar Mancha, an NGO registered at the Kathmandu District Administration Office, had resorted to crowdfunding for the relief through the US-based GoFundMe.com after the devastating earthquake struck Nepal on April 25 last year. The NGO had collected funds from hundreds of donors through the Malaysia-based Shakya Muni Foundation and the Dubai-based Makani International also. Records show the NGO had received a total of Rs 31.74651 million for the relief operation, according to the CIB. The former officer bearers of the NGO had lodged a complaint at the Kathmandu District Administration Office against the NGO with a claim that Rs 16.7785 million was embezzled by feigning that it was spent in the relief distribution to those affected by the earthquake. Sherchand was arrested on August 24 and Chaudhary on August 26. Investigation into the case is underway, the CIB said.
#Nepal earthquake #Nepal earthquake relief #CIB #crowdfunding #Sakun Sherchand #Amarkanta Chaudhary #Go Fund Me #Buddhist Janadhikar Mancha
You May Also like: