No wildfire casualty reported so far this year 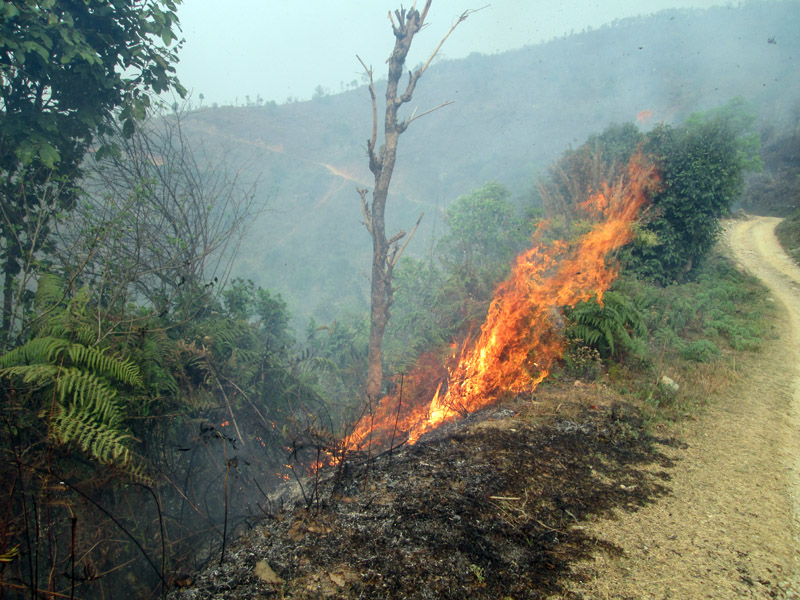 A wildfire spreading in Jumdanda Community Forest of Bandipur, Tanahun, on Friday. Photo: THT
Kathmandu, May 2 Although April is generally the peak month for forest fires in the country, no casualties have been reported in forest fires this summer so far. Coordinator of the Regional South Asia Wildland Fire Network Sundar Sharma said  climatic conditions this year was not favourable for wildfires. Although 2015 was also predicted to be free of forest fires, three people died and two were injured in a wildfire that year. “Pre-monsoon rains have prevented forest fires this year,”  Sharma told The Himalayan Times, “The lack of needed moisture and continuing precipitation has prevented wildfires.” Sharma expressed his happiness and suggested to the government to mark this year as ‘zero wildfire casualty year’ if this continued for the next month. “Forest fires cause a lot of destruction of both life and property in Nepal, but this has been a relief,” he said. Sharma opined that awareness raising programmes related to forest fires could have also contributed to the prevention of this disaster this year. The Regional South Asia Wildland Fire Network had recorded 82 human casualties in wildfires in the last one decade. Forest fires typically occur during the period from mid-February to May in Nepal. In April 25, 2009, 420 incidents of forest fires were recorded in a single day, the highest recorded wildfire incidents in a day. With the onset of dry and windy season which usually begins as early as February and until June, various places across the country, especially the Tarai districts that witness rise in temperatures during dry months, report cases of wildfire each year. According to Sharma, since 2009 the government has come up with some positive interventions to address the growing threat of wildfires in forests and communities, including the formulation of Forest Policy released this year that has integrated policies to minimise the risks and prepare communities to combat wildfires. In 2010, the Forest Fire Management Strategy was endorsed which focuses on involving local communities and concerned stakeholders to mitigate the risk of wildfires in both community and public forests. The objectives of the strategy are to   develop   and   strengthen   necessary policy   and   institution   for   forest   fire management; to  mobilise  local  communities,  civil societies,  government,  and  non-government organisations in the prevention and control of forest fires; to  develop  communication  and  information  management  system  for  forest  fire  disaster mitigation; and to incorporate wise use of fires for ecosystem management and for livelihoods of the local people.
#wildfire casualty #Regional South Asia Wildland Fire Network
You May Also like: