Phuyal's death to be probed 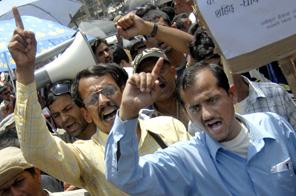 KATHMANDU: The government on Thursday formed a high level committee to investigate the death of UCPN-Maoist cadre Rajan Phuyal.

Maoists shut down the valley on June 15 and staged sit-in protests since Wednesday in front of Singha Durbar gate for two hours demanding a probe into the death.

According to police Phuyal was found unconscious in Balaju on June 11 and was rushed to Bir Hospital. He was then transferred to TU Teaching Hospital on the same day where he passed away, added Police. Youth Communist League, youth wing of Maoist, has been accusing Youth Force, youth wing of UML, of killing Phuyal.

#Phuyal's death to be probed
You May Also like: