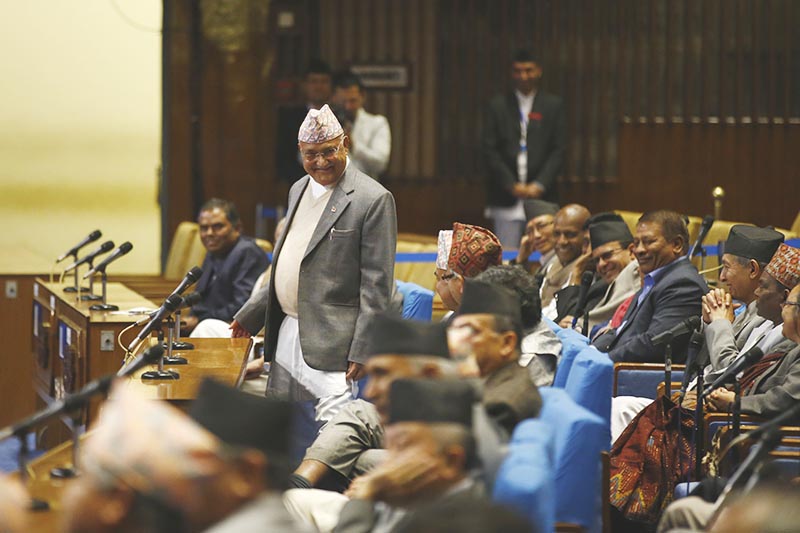 Prime Minister KP Sharma Oli is all smiles after winning the vote of confidence with over two-thirds majority in the House of Representatives at the Federal Parliament, in Kathmandu, on Sunday, March 11, 2018. Photo: Skanda Gautam/THT
KATHMANDU: Prime Minister KP Sharma Oli secured 208 votes today to pass the floor test with more than two-thirds majority in the House of Representatives. Of the 275 lawmakers, 268 were present today.  Only 60 lawmakers of the opposition party voted against the PM. Nepal Workers and Peasants Party lawmaker Prem Suwal did not cast his vote though he was present in the House. Three NC lawmakers — Pradeep Giri, Debendra Raj Kadel and Pramod Kumar Yadav — and Naya Shakti Party Coordinator Baburam Bhattarai were absent today. CPN-UML’s 121, CPN-MC’s 52, Federal Socialist Forum-Nepal’s 16 and Rastriya Janata Party-Nepal’s 16 lawmakers voted for the PM. RJP-N lawmaker Resham Chaudhary, who is in judicial custody, could not take part in the voting. Rastriya Prajatantra Party lawmaker Rajendra Lingden, Durga Poudel of Rastriya Jana Morcha-Nepal and independent lawmaker Chhakka Bahadur Lama also voted for PM Oli. Speaker Krishna Bahadur Mahara did not cast his vote. As per Article 76 (4) of the constitution, PM Oli was required to prove majority in the House within 30 days after he was appointed the prime minister. Earlier, PM Oli and CPN-MC Chairman Pushpa Kamal Dahal addressed a joint meeting of their parties’ lawmakers and instructed them to vote for PM Oli. Addressing the House, the PM urged lawmakers to vote for him. UML leader Madhav Kumar Nepal, CPN-MC Chairman Pushpa Kamal Dahal, FSF-N lawmakers Sarita Giri, RJP-N leader Mahendra Ray Yadav, independent lawmakers Lingden and RJM-N lawmaker Poudel spoke in the House supporting the  PM. NC deputy parliamentary leader Bijaya Kumar Gachhadar told the House that NC would vote against the PM during the trust vote. He said NC lawmakers would sit on opposition benches and play the role of a watchdog. RJP-N and FSF-N speakers sought the PM’s committment to constitution amendment. Referring to the left alliance’s unconditional support to Lalbabu Raut’s government in Province 2, the PM asked NC lawmakers to cast vote in his favour without any condition. But NC lawmakers Gagan Thapa, Pushpa Bhusal and Athar Kamal Musalman said some of the PM’s recent actions were against democratic norms and values. Bhusal said PM Oli’s decision to rescind some of the Sher Bahadur Deuba-led government’s decisions was against democratic norms. Addressing the House, PM Oli said he wanted two-thirds majority in his favour to show the world that he was the prime minister of Nepal and not of UML and CPN-MC. He, however, added that the left alliance’s support was crucial to make him the prime minister.  He said the constitution could be amended on the basis of necessity, demand and rationale. The PM said he would be accountable for his actions and would not make excuses. CPN-MC Chair Pushpa Kamal Dahal said the government should be action- oriented. “I want the government to show results to ensure good governance and achieve the goals of stability and prosperity,” he added. (UPDATED)  PM Oli garners majority of vote of confidence from HoR