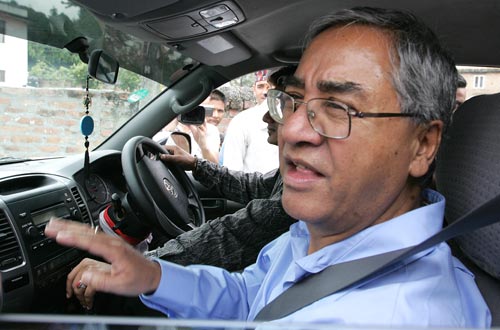 KATHMANDU: Nepali Congress stalwart and former Prime Minister Sher Bahadur Deuba today ruled out the possibility of correcting the step taken by the President in reinstating former Chief of Army Staff (CoAS) Rookmangud Katawal.
He said that the President’s move could not be challenged on moral grounds since it was backed by 18 political parties. He was referring to the UCPN-Maoist’s all-time demand over correcting the President’s move.
“It was not the President but then Prime Minister Prachanda who committed the mistake by sacking then CoAS,” Deuba said at a tea party organised by Mushlim Associal, Nepal, the NC’s sister organisation.
Meanwhile, Deuba also criticised NC president GP Koirala of hastily recommending his daughter Sujata Koirala as the Deputy PM. “It shows his sense of nepotism, which neither bats good for him nor for his daughter,” Deuba said.
NC vice president Ram Chandra Poudel challenged the Unified CPN-Maoist to capture power from the street by disregarding parliamentary norms.
“The UCPN-M’s pattering for civilian supremacy was like elephant’s tusk. They, in fact, want to achieve power. If that’s so, why not they forge majority in the parliament to attain the power?” he asked. “But they will never be able to achieve power from the street,” he added.
On the occasion, Sushil Koirala, NC acting president said the peace process would never reach to a logical end without consensus, cooperation and unity among the political parties.

#says Deuba #Prez unblemished of his move on CoAS
You May Also like: