Ranipokhari reconstruction to begin from April 24 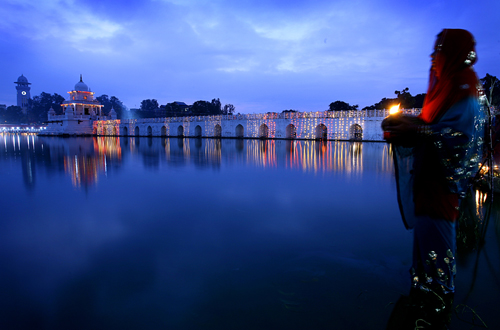 A splendid view of Rani Pokhari on the day of the Chhath festival on November 13, 2010. Photo: THT/File
KATHMANDU: The reconstruction of Ranipokhari is to begin from coming Sunday. The April 25 earthquake last year had completely damaged the Balgopaleswor Temple located in the mid-part of Ranipokhari. According to Spokesperson of Kathmandu Metropolitan City (KMC) Gyanendra Karki, the KMC is putting its efforts to beautify Ranipokhari with the temple after around 360 years. The KCM has put forth a plan to remove dirt and mud piled up in Ranipokhari which has not been cleaned up since long. A budget of Rs 120 million has been allocated for the reconstruction. President Bidya Devi Bhandari on January 16 had inaugurated the Ranipokhari reconstruction campaign. Ranipokhari has possessed around 60 ropanis of land. The pond has occupied 40 ropanis. The beautification plans include installing electric lighting, construction of rallying around the pond for the protection of the pond, planting green saplings, setting up musical fountains and construction of rounding pavement. It has been learned that the entire works will be completed within six months of the beginning of construction.
#April 25 earthquake #Ranipokhari
You May Also like: