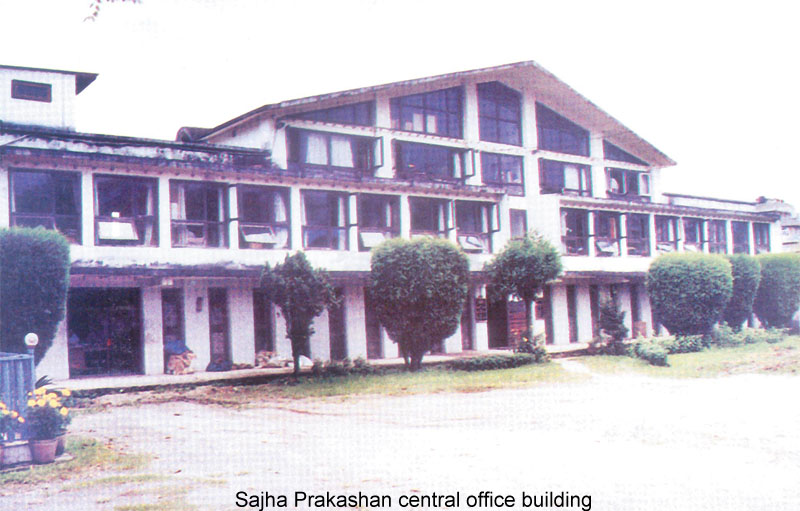 Sajha Prakashan central office building. THT/File
Kathmandu, September 18 General Manager of Shajha Prakashan Dolendra Prasad Sharma clarified to the Ministry of Education that he did not violate any law while taking steps to strengthen the publication. His response came to the second clarification sought by the ministry with regard to the allegation of irregularities against him. Sharma said in his second reply to the ministry he had tried to clarify all six questions put forth by the ministry. Sharma said he terminated the contracts of some employees to decrease overstaffing. “But when we got the job to produce and distribute English medium text books, we hired some staffers as per the decision of the board of directors, ” Sharma said in his letter to the MoE. He stated that Sajha Publication failed to get its accounts audited for eight years mainly because its documents and files were taken by the Commission for the Investigation of Abuse of Authority . “After several efforts, now the CIAA has sent the documents,” he said. Sharma also stated that he decided to give some printing jobs to private presses as none of the printing houses applied when Sajha Prakashan opened the tender process. “We made all these decisions on the basis of law and followed due process. We did not pay the private press more than the market price,” Sharma added. He also said Sajha Prakashan decided to seek supply of paper from Address Paper Mills as no other paper mill evinced interest in supplying paper to Sajha Prakashan. Sharma said his offices’ decision to seek supply of paper from Address Paper Mills was in consonance with the bylaws of Sajha Prakashan, which states that the amount to be paid for supply of paper must not be higher than the market price. In response to the MoE’s question why Sharma did not fulfil his commitment expressed before the prime minister, Sharma said he had sought Rs 39 crore for the development of Sajha Prakashan but got only 15 crores and that was the reason he could not do the expected things. The MoE sought clarification from Sharma for the first time last week. It sought second clarification after it found Sharma’s clarification unsatisfactory. “MoE’s office bearers sought second clarification without reading my first response”, Sharma said. MoE Spokesperson Hari Lamsal said that Sharma was asked for clarification for the second time, because the MoE was not satisfied with his first reply. “It clearly hints that there are some violations of rules,” he said. He also said that the ministry would take a call on Sharma’s second reply soon.
#Ministry of Education #MoE #Sajha Publication #Dolendra Prasad Sharma #Shajha Prakashan #violation of law
You May Also like: