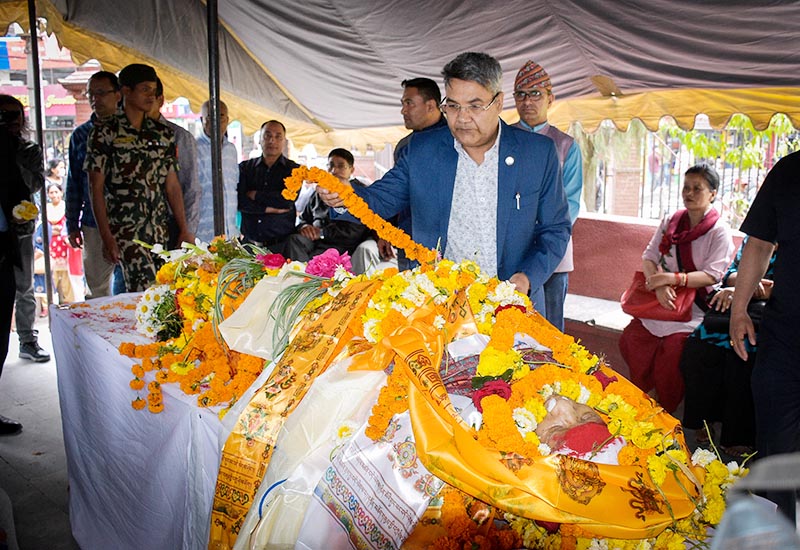 Minister of Information Technology and Communications Gokul Baskota paying last respects to late Pushkar Lal Shrestha at Bhugol park, in Kathmandu, on Wednesday, April 17, 2019. Photo: Naresh Krishna Shrestha/THT
Kathmandu, April 17 Senior journalist Pushkar Lal Shrestha, who was battling with Guillain-Barré syndrome, passed away today at the age of 60. Shrestha was the chairperson and editor-in-chief of Kamana News Publications Pvt Ltd. A press statement released by the publications said he breathed his last at 11:49 am at Thapathali-based Norvic International Hospital. “He died in the course treatment. We are devastated by his untimely death and have lost our guardian, guide and source of inspiration,” the statement read. “He was a person who always fought and encouraged others to fight for justice and equality, but himself lost his battle with death,” it added. Senior journalist Shrestha had undergone sinus surgery at Vayodha Hospital and kidney stone surgery at Blue Cross Hospital some five-and-a-half months back. Though his health was normal until the nasal surgery, he started developing health complications following the kidney surgery. Amid all this, Shrestha was admitted to Norvic International Hospital, where he was diagnosed with Guillain-Barré syndrome — a rare, but serious autoimmune disorder. The hospital had referred him to Medanta Hospital in Haryana, India. The hospital cleared him of the virus after two-and-a-half months of medical treatment. “Upon returning home from India, Shrestha was kept at Norvic International Hospital for a few days. He underwent physiotherapy and started recovering gradually,” the statement added. Later, he was discharged from the hospital as doctors advised him to undergo physiotherapy and other necessary medical treatments at his own residence in Bhainsepati, Lalitpur. After his health deteriorated again, Shrestha was kept in intensive care unit of Mediciti Hospital last month. The hospital had referred him to Norvic International Hospital due to his critical, but stable condition. Shrestha, a graduate in humanities, was born in August 1959 in Kathmandu. He was the editor-in-chief of Kamana film magazine, Nepal Samacharpatra daily, Mahanagar daily and Sadhana health magazine. He also worked as the founding chair of Nepal Media Society, International Press Institute (Nepal National Committee), executive member of Nepal Press Institute, Editors’ Society of Nepal, Nepal Press Club, Press Council Nepal, National News Agency (RSS) and Nepal SAARC Journalist Forum. Nepali Congress, Rastriya Prajatantra Party-Nepal, Federation of Nepali Journalists and several other organisations have condoled Shrestha’s demise and highlighted his contribution to the development of Nepali journalism. Meanwhile, his last rites were performed at Pashupati Aryaghat later in the day. Shrestha is survived by his wife and three sons.
#Guillain-Barre syndrome #Kamana News Publications Pvt Ltd #Pushkar Lal Shrestha
You May Also like: