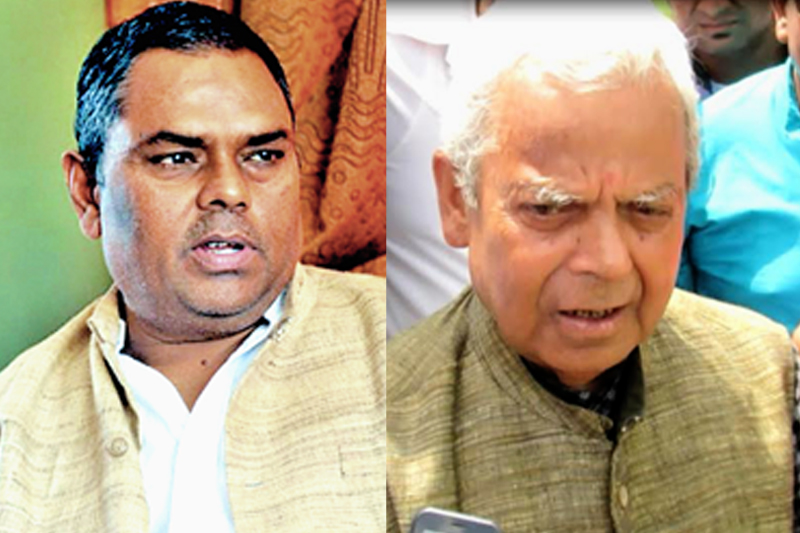 (Left) Federal Socialist Forum-Nepal leader Upendra Yadav and TMDP leader Mahantha Thakur
Kathmandu, September 1 Talks between the government and agitating parties and outfits remain uncertain although the government said it was in touch with representatives of agitating parties at informal level. Minister for Peace and Reconstruction Narahari Acharya said Prime Minister Sushil Koirala and his team were contacting representatives of the agitating parties at an informal level. Agitating Madhesi parties and Tharu leaders, however, alleged that the government was spoiling the environment for talks by suppressing their movement and killing agitators. Tarai Madhes Democratic Party leader Sarvendra Nath Shukla said, “Although the United Democratic Madhesi Front was supposed to meet today to decide whether or not to sit for talks with the government, the meeting could not take place, as all leaders could not come to Kathmandu due to turmoil in the Tarai districts, including Dhanusha, Bara and Parsa,” Shukla said. Federal Socialist Forum-Nepal leader Upendra Yadav and TMDP leader Mahantha Thakur arrived in Kathmandu today but other leaders, including Rajendra Mahato of Sadbhawana Party, are yet to arrive, he said. Sadbhawana Party leader Laxman Lal Karna said Mahato would not come to Kathmandu and would rather go to western districts tomorrow to address programmes. UCPN-M leaders Pushpa Kamal Dahal and Baburam Bhattarai met the PM this evening and requested him to resolve the crisis in Tarai through talks. “Since the use of force against the agitators does not resolve the problem, their rational demands should be addressed through talks,” Bhattarai’s Personal Secretary Bishwadeep Pande quoted Dahal and Bhattarai as telling the PM.
#Prime minister Sushil Koirala #Madhesi parties #Upendra Yadav #Mahantha Thakur #agitating parties
You May Also like: