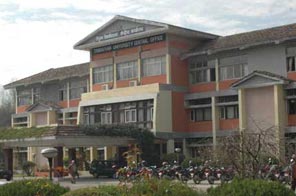 KATHMANDU: Tribhuvan University lectures associated with Nepal Part-Time Teachers’ Association (NPTTA) today ended their indefinite hunger strike, after the government agreed to form a task force to address their demand.
The announcement came mid-night yesterday after a tripartite meeting between the government, agitating teachers’ union and the university administration hammered out a deal.
Three part-time teachers – Prem Kumar Bishwokarma of Nepal Commerce Campus, Amritandra Karna of Tri Chandra Campus and Lila Raj Baral of Nepal Commerce Campus – had been staging the indefinite hunger strike for the last ten days. Their health condition was deteriorating.
“We’re hopeful that the government will not betray us this time,” Govinda Luitel, NPTTA member told The Himalayan Times.
Luitel said a meeting held
between the officials of the Ministry of Education (MoE), TU professors and the NPTTA representatives
yesterday reached an agreement for the formation of the taskforce within a week to address the teachers’ demands.
The agreement, among other things, stated that the taskforce comprising MoE representatives, Tribhuvan University officials and teachers, would make a thorough study on the number of part time teachers in TU who have completed at least one academic session.
Luitel further said the taskforce would also identify the vacant quotas in the country’s oldest university and work out how many more could be hired.
The taskforce will submit its report to the ministry, which will in turn direct the TU to address the demands raised by part-timers.

#TU part-timers end hunger strike
You May Also like: