US Ambassador's farewell call to PM 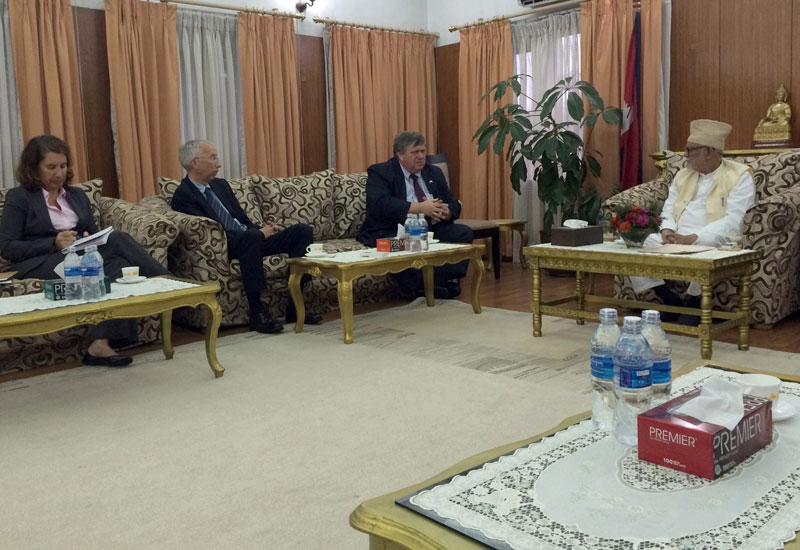 Outgoing US Ambassador to Nepal, Peter W Bodde (2nd from right), holds farewell meeting with PM Sushil Koirala, at the latter's residence in Baluwatar of Kathmandu, on Thursday, September 10, 2015. Photo: RSS
KATHMANDU: US ambassador to Nepal, Peter W Bodde, on Thursday held a farewell meeting with Prime Minister Sushil Koirala. During the meeting, the outgoing US envoy extended a special invitation to PM Koirala for a meeting to be held among the countries, which contributing troops to the UN Peacekeeping Missions. The meeting to be organised by US President Barrack Obama will take place during the UN General Assembly. During the meeting with PM Koirala today, Ambassador Bodde also relayed President Obama's commendation for the support Nepal has lent by contributing troops to UN's peacekeeping missions, PM's Foreign Affairs Advisor Dinesh Bhattarai told the Rastriya Samachar Samiti (RSS). PM Koirala, on the occasion, expressed his gratitude to the US government for supporting the resettlement of the Bhutanese refugees and said Nepal hoped for more support for the same. The two also discussed issues ranging from Nepal-US bilateral relations and the ongoing constitution making process, according to Bhattarai. Bodde, who is completing his tenure in Nepal, also extended wishes to the PM for timely constitution. The Ambassador also wished for speedy reconstruction in the aftermath of the earthquake and pledged continued US support for the same.
#Peter W Bodde #US ambassador to Nepal #farewell call #farewell meeting
You May Also like: