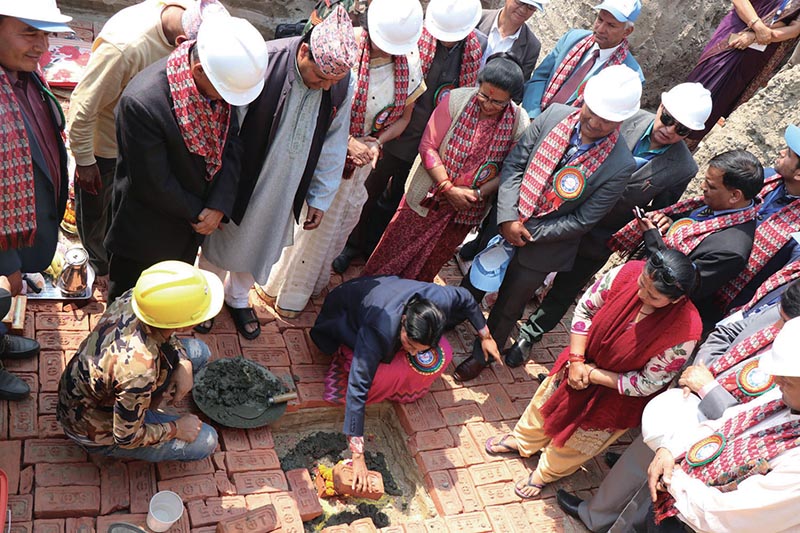 Minister of State for Health Padma Kumari Aryal laying the foundation stone for the construction of National Chest Disease Hospital, in Bhaktapur, on Saturday.
Bhaktapur, March 24 World Tuberculosis Day was marked here today with the theme ‘Wanted: leaders for a TB-free world’. “It is an effort to end TB,” said Dr Kedar Narsingh KC, director at National Tuberculosis Centre. To meet the Sustainable Development Goals, Nepal has to eradicate TB by 2030, however, increasing cases of multi-drug resistant TB have turned out to be a major hurdle in achieving SDGS. Health practitioners themselves are suffering from multi-drug resistant tuberculosis. It is estimated that there are 1,000 MDR-TB cases in the country. From among 1,000 patients only 400 are receiving treatment through DOTS centres under National Tuberculosis Programme, according to Dr KC. Multi-drug resistant tuberculosis is a form of tuberculosis infection caused by bacteria that are resistant to treatment with at least two of the most powerful first-line anti-TB medications. “The tendency of TB patients dropping out of treatment is increasing as the treatment course spans over 24 months. Irregular medication among TB patients leads to resistance to first-line anti-TB medications. These patients are ultimately diagnosed with MDR-TB,” said Dr KC. World Health Organisation estimates that there were 600,000 new cases with resistance to rifampicin, the most effective first-line drug, of which 490,000 had MDR-TB. Along with the multi-drug resistant patients there are at least 11,000 to 13,000 patients who are not seeking any treatment. It is estimated that some 45,000 new cases of tuberculosis are added each year. As per National Tuberculosis Centre, in 2016/17, a total of 31,764 cases were registered under National Tuberculosis Programme. Tuberculosis is one of the top ten causes of death worldwide, as per the data of WHO. In 2016, 10.4 million people suffered from TB, and 1.7 million died due to the disease. Over 95 per cent of TB deaths occur in underdeveloped and developing countries. To find out the cases of tuberculosis, the centre has completed prevalence survey in Sindhuli, Bhaktapur and Dolakha districts. It also plans to start a survey in 55 more districts within a month. The survey will be done in 99 clusters where there will be 550 to 600 people in each cluster. Meanwhile, foundation stone of the National Chest Disease Hospital was laid amidst a programme organised at National Tuberculosis Centre. State Minister for Health Padma Kumari Aryal laid the foundation stone. The hospital with 300 beds will be constructed within three years. “The hospital will be help to provide timely treatment to tuberculosis patients,” said Dr KC. Tuberculosis is caused by bacteria — Mycobacterium tuberculosis that most often affects the lungs. TB is spread from person to person through the air. When people with lung TB cough, sneeze or spit, they propel the TB germs into the air. A person needs to inhale only a few of these germs to become infected. When a person develops active TB disease, the symptoms such as cough, fever, night sweats, or weight loss may be mild for many months and can result in transmission of the bacteria to others. However, tuberculosis is curable and preventable.
#World Health Organisation #TB #National Tuberculosis Centre #World Tuberculosis Day #National Chest Disease Hospital
You May Also like: