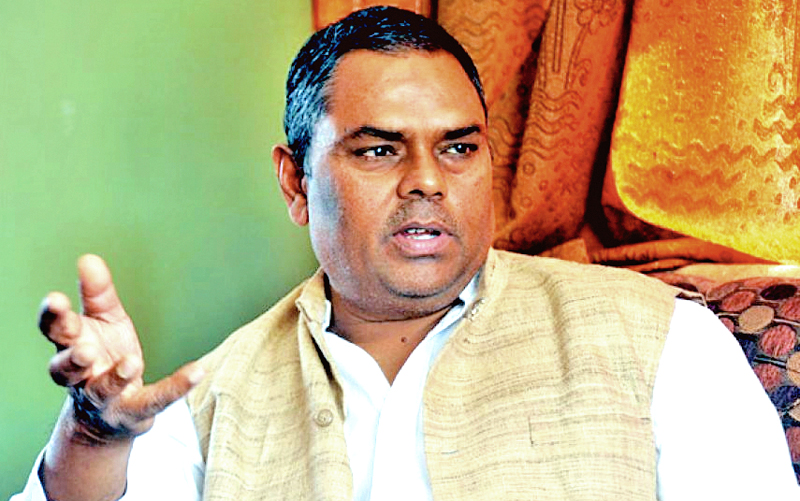 Upendra Yadav
Kathmandu, September 2 Federal Socialist Forum, Nepal Chair Upendra Yadav accused the government of committing genocide in Madhes and drew the attention of the international community to the problem of human rights violations in the southern plains. Organising a press conference here today, Yadav said the government was communal and racist and was committing genocide against Madhesis and Janajatis. Yadav said a criminal case should be filed against the government at the international criminal court for its alleged atrocities in Madhes. He said the security forces were indiscriminately shooting people in Madhes and they were not sparing even hospitals. “Security forces use water cannon in Kathmandu to disperse protesters who defy prohibited zones, but in Madhes, they fire bullets at protesters when they defy such orders,” he added. He said the government was trying to suppress people’s peaceful protest in the Tarai by mobilising Nepali Army and armed police force. Yadav said the government must withdraw security forces from Madhes and commit to honour past agreements if it wanted to prepare grounds for talks with protesting parties. Yadav said agitation in the Madhes had shattered the ruling parties’ strength of two-third majority in the Constituent Assembly. Parliamentary party leader Ashok Kumar Rai said the ongoing agitation in Madhes/Tharuhat was not merely an agitation of that region but of the entire country. Meanwhile, FSP-N issued a press release saying that there was danger that the gains of the past movements would be lost. “A serious conspiracy is being hatched to push the country towards regression,” the FSP-N said in its release. The party said the houses of Resham Chaudhari and Janak Chaudhari were burnt even when curfew was clamped in Kailali. The party said the government, instead of preparing grounds for negotiation, was pushing the country towards civil war by suppressing the agitation and therefore, the government should be responsible for all consequences.
#Upendra Yadav #genocide #human rights violations #Madhes/Tharuhat
You May Also like: