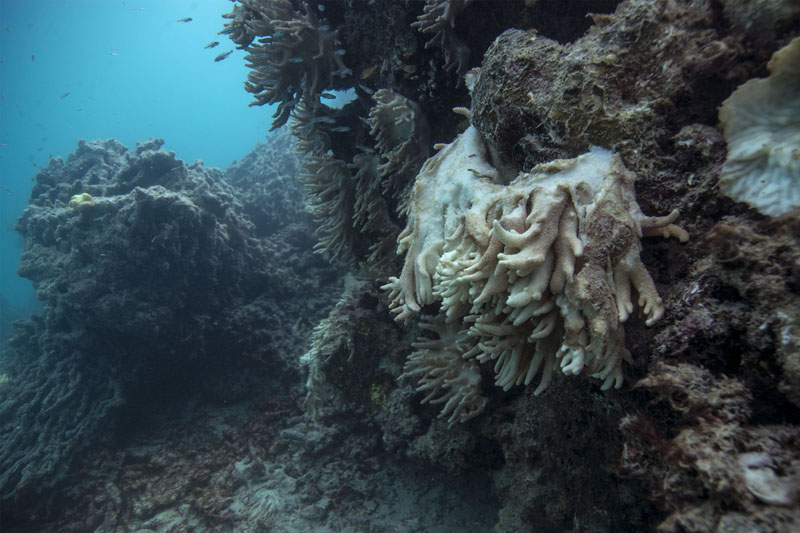 Decomposing coral is shown on the Great Barrier Reef in Australia, in May, 2016. Photo: XL Catlin Global Reef Record via AP

HONOLULU: As the largest international gathering of coral reef experts comes to a close, scientists and policy makers are moving ahead with plans for action to save the world's reefs, which are being rapidly damaged.

"We are not ready to write the obituary for coral reefs," James Cook University professor Terry Hughes, who is also the president of the ARC Centre of Excellence for Coral Reef Studies in Australia, said about the "unprecedented" move by the scientific community. Scientists are not known for their political activism, he said, but they felt this crisis warranted such action.

A call to action from three Pacific island nations whose reefs are in the crosshairs of the largest and longest-lasting coral bleaching event in recorded history was presented Friday at the conclusion of the International Coral Reef Symposium in Honolulu. The Associated Press was given advance access to the call for action and the scientific community's response.

The heads of state from Palau, Micronesia and the Marshall Islands attended the conference and will provide a plan to help save their ailing coral reefs, which are major contributors to their local economies and the daily sustenance of their people. The call to action, signed by the three presidents, asked for better collaboration between the scientific community and local governments, saying there needs to be more funding and a strengthened commitment to protecting the reefs.

"If our coral reefs are further degraded, then our reef-dependent communities will suffer and be displaced," the letter said. They also called for more integration of "traditional knowledge, customary practices and scientific research" in building a comprehensive coral reef policy.

In response to the letter, the scientific community at the conference said: "We pledge to take up the 13th ICRS Leaders' Call to Action, and will work together with national leaders of the Federated States of Micronesia, the Republic of Palau, the Republic of the Marshall Islands, and the world to curb the continued loss of coral reefs."

Bleaching is a process where corals, stressed by hot ocean waters and other environmental changes, lose their color as the symbiotic algae that lives within them is released. Severe or concurrent years of bleaching can kill coral reefs, as has been documented over the past two years in oceans around the world. Scientists expect a third year of bleaching to last through the end of 2016.

In the northern third of the Great Barrier Reef, close to half of the corals have died in the past three months, said Hughes, who focuses his research there. The area of the reef that suffered most is extremely remote, he said, with no pollution, very little fishing pressure and no coastal development.

But the panel of scientists emphasized the progress they have made over the past 30 years and stressed that good research and management programs for coral reefs are available. The scientists said they just need the proper funding and political will to enact them.

The researchers focused on the economic and social benefits coral reefs contribute to communities across the globe, saying the critical habitats generate trillions of dollars annually but conservation efforts are not proportionately or adequately funded.

In the United States, the budget for the federal coral reef conservation program is set at about $27 million a year, said Bob Richmond, director of the University of Hawaii's Kewalo Marine Laboratory and convener of this year's International Coral Reef Symposium.

In Hawaii, he said, the reefs are valued at $34 billion, and the return to the state's economy is about $360 million annually — meaning the entire nation's budget for coral reef conservation is less than 10 percent of the annual return in that one state alone.

The Coral Reef Conservation Act of 2000, which aimed to protect coral reefs and create programs to manage their conservation, has been plagued by political resistance and a severe lack of funding, Richmond said.