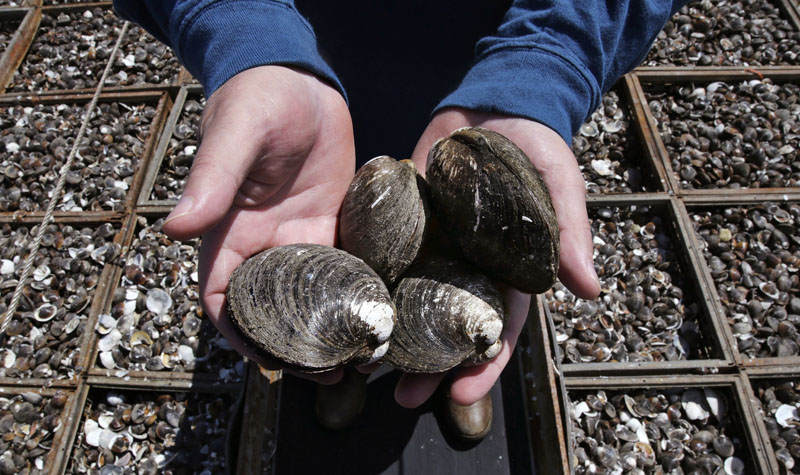 Mike Mohr, captain of the fishing vessel E.S.S. Pursuit, cradles quahog clams on the deck of his ship while offloading a two-day haul at a dock in New Bedford, Massachusetts, on Thursday, May 19, 2016. Photo: AP
SEABROOK: The cod isn't just a fish to David Goethel. It's his identity, his ticket to middle-class life, his link to a historic industry. "I paid for my education, my wife's education, my house, my kids' education; my slice of America was paid for on cod," said Goethel, a 30-year veteran of these waters that once teemed with New England's signature fish. But on this chilly, windy Saturday in April, after 12 hours out in the Gulf of Maine, he has caught exactly two cod, and he feels far removed from the 1990s, when he could catch 2,000 pounds of the fish in a day. Fishing along the coast of the Northeast still employs hundreds. But every month that goes by, those numbers fall. After centuries of weathering overfishing, pollution, foreign competition and increasing government regulation, the latest challenge is the one that's doing them in: climate change. Though no waters are immune to the ravages of climate change, the Gulf of Maine best illustrates the problem. The gulf, where fishermen have for centuries sought lobster, cod and other species that thrived in its cold waters, is now warming faster than 99 percent of the world's oceans, scientists have said. For the fishermen of the northeastern US, whether to stick with fishing, adapt to the changing ocean or leave the business is a constant worry. Waving the white flag Robert Bradfield was one of the East Coast's most endangered species, a Rhode Island lobsterman, until he pulled his traps out of the water for the last time about a decade ago. He now works on a pilot boat, guiding larger ships in and out of the harbor. He is glad he's still on the water, but he misses lobstering and the community of fishermen he used to see in Newport. "Of all the guys I fished with, I was a lobsterman for 30 years, and there's maybe three left," he said. The number of adult lobsters in New England south of Cape Cod slid to about 10 million in 2013, according to a report issued last year by an interstate regulatory board. It was about 50 million in the late 1990s. The lobster catch in the region sank to about 3.3 million pounds in 2013, from a peak of about 22 million in 1997. Bradfield, a father to three grown children, said his decision was more about economics than science. He is glad he left the business, as painful as it was to leave a piece of his identity behind. "There's a saying: Behind every successful fisherman is a wife with a good job," he said. Hanging on, getting by David Goethel has spent most of his life fishing for cod, and he doesn't want to stop now. "I could catch the entire quota for the Gulf of Maine in eight days," Goethel said in a bit of bravado he swears is not an exaggeration. "I wouldn't break a sweat doing it." He operates a trawler that leaves from New Hampshire. But the catch these days is different; with cod in jeopardy and catch quotas at all-time lows, he tries to eke out a living by supplementing cod with just about anything else. Retirement isn't in the cards for the 62-year-old Goethel — at least, not soon. The challenges climate change have brought to commercial fishing are perhaps most noticeable in New England's cod fishery, which has dwindled from more than 1,200 boats in the 1980s to only a few dozen today. In that time, the catch of cod has plummeted from more than 117 million pounds in 1980 to just over 5 million in 2014. Goethel, also a marine scientist, doesn't bemoan the ocean's changing temperature as much as the rules he must play by. Because of tight quotas, he must avoid fishing around areas where cod live, he said. The changes have been difficult emotionally for Goethel, whose sons, Daniel and Eric, are a fisheries biologist and a tugboat captain. Old traditions are hard to part with. "Eric would get rolled out of bed to go fishing," Ellen said. "He did the same thing to me." Adapting commuting Michael Mohr harvested surf clams for almost 30 of his 55 years, and his desire to stay in the business takes him far from his family. About 10 years ago, he started commuting from Mays Landing, New Jersey, six hours each way to the former whaling port of New Bedford, Massachusetts. He has also switched clam species; he got his start fishing for Atlantic surf clams but now pursues the ocean quahog. "We're finding clams in deeper water instead of inshore water, where we used to work 25 years ago," Mohr said. Whether Mohr can make holidays like Thanksgiving is "hit-and-miss," said his wife, Melanie. Mohr is undaunted. Clamming has been good to him, and if he has to spend more time on the road as he nears 60, so be it. "It's just a way of life," Mohr said. "You've got to go where the money is at, and you're happy. Right now, I'm happy."
#cod #Fading fishermen #Mike Mohr #Quahog clams
You May Also like: