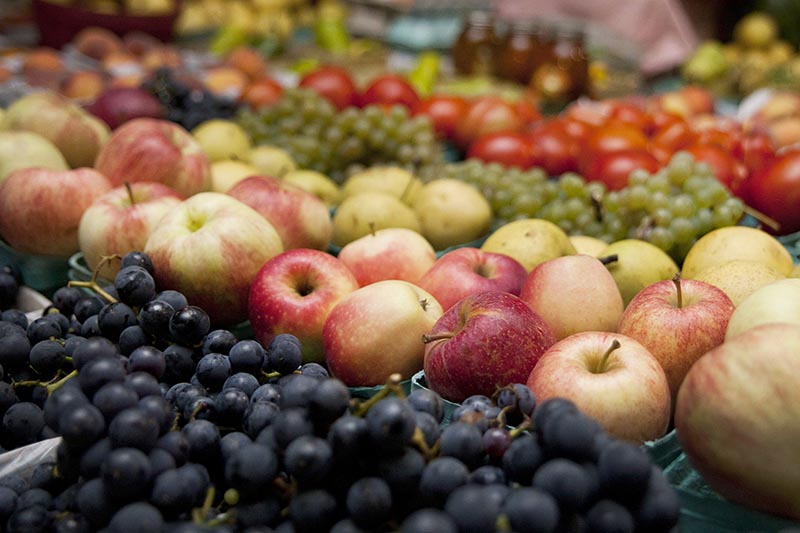 Produce is displayed for sale at a farmers market in Kalamazoo, Mich, on September 18, 2014. Photo: Katie Alaimo/Kalamazoo Gazette via AP
For the first time, a large experiment suggests that trimming dietary fat and eating more fruits and vegetables may lower a woman's risk of dying of breast cancer. The results are notable because they come from a rigorous test involving 49,000 women over two decades rather than other studies that try to draw health conclusions from observations about how people eat. Healthy women who modified their diets for at least eight years and who later developed breast cancer had a 21% lower risk of dying of the disease compared to others who continued to eat as usual. However, that risk was small to start with and diet's effect was not huge, so it took 20 years for the difference between the groups to appear. The diet change also did not lower the risk of developing breast cancer, which was the study's main goal. Still, doctors say the results show a way women might improve their odds of survival. "Patients are eager for things that they can do," said Dr. Jennifer Ligibel of the Dana-Farber Cancer Institute in Boston. "It really suggests that changing your diet, losing weight, exercising, could actually be a treatment." She had no role in the study, led by Dr. Rowan Chlebowski of Los Angeles Biomedical Research Institute at Harbor-UCLA Medical Center. He gave results Wednesday in a telephone news conference held by the American Society of Clinical Oncology ahead of its annual meeting later this month. "We need to take this very seriously" because of the quality of the study, said Dr. Lidia Schapira, a breast cancer expert at Stanford University and spokeswoman for the oncology society. "What we eat matters." The results come from the Women's Health Initiative, a big federally funded study that previously overturned longtime advice on hormone therapy for menopause symptoms. The diet part of the study enrolled 48,835 women ages 50 to 79 without breast cancer in the 1990s. At the start, they were getting one third of calories from fat. One group was given regular counseling sessions and told to limit fat to 20% of calories and to eat more vegetables, fruits and grains. The rest continued their usual eating habits. The group aiming for low fat missed the target, but cut fat intake to 24% after one year and about 30% after eight years — still lower than where they started. Fat intake in the comparison group stayed about the same. The study previously showed that there were fewer deaths from all causes among women in the lower fat group who later developed breast cancer. Now, after 20 years, there's also a difference in deaths from that disease. However, only 383 women died of breast cancer, so the benefit in absolute terms was small. Was it trimming fat or increasing vegetables, fruits and grains that helped? "Diet is complicated. If somebody is eating more of one food, they're eating less of another," and it's hard to say which change is doing what, Ligibel said. Eating too many starchy foods isn't good either, and researchers now know that the type of fat matters, and that some fats such as olive oil are better than others. "Our view of diet has evolved since this study was designed," she said. Ligibel is leading a study to see whether losing weight improves survival for women with early-stage breast cancer. Chlebowski is working on another study to see whether women who are obese or have certain other health risks get the biggest benefit from trimming dietary fat. Results from this study suggest they might.
#Fruits #breast cancer #dietary fat
You May Also like: