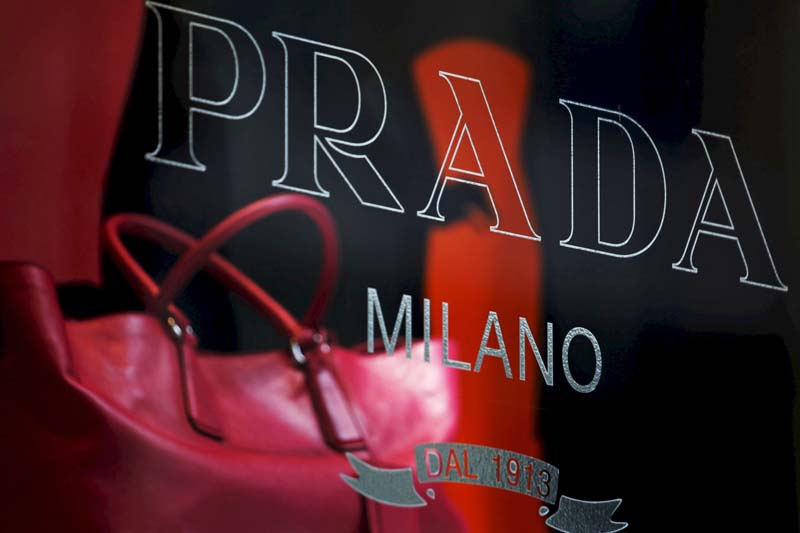 A handbag is seen behind a display window at a Prada store in Hong Kong on June 3, 2011. Photo: Reuters/ File
MILAN: Italy's Prada blended military, nautical and 1940s looks for women next fall at Milan Fashion Week and joined in on the "see now, buy now" retail model by offering two new styles of bag at selected outlets from Friday. Miuccia Prada, regarded as a trailblazer by fashionistas, mixed prints with luxurious fabrics to create glamorous, colorful, layered outfits, for her collection. The designer, 66, put fur on sleeves and linings of check or leather jackets and cloaks, embroidery on slinky velvet dresses and played with an array of prints - cactus plants, flowers and fruit - on tops, skirts and dresses. Brocade also featured heavily in the collection - namely in gold on jackets and skirts.

A handbag is seen behind a display window at a Prada store in Hong Kong on June 3, 2011. Photo: Reuters/ File
Dark coats reminiscent of an elegant military style were teamed with white nautical hats and thick tights. Dresses and slinky jackets had big shoulders, a nod to 1940s silhouettes, and some were worn with chunky, elbow-length gloves. Nearly all looks were teamed with wide corset-like belts, tie-up boots, buckled sandals or peep-toe shoes and handbags, some with charms, others so small they were worn around the neck. The brand, known for its luxury leather goods with handbags costing as much as 6,000 euros ($6,600), presented its latest addition to the its accessories range at the show: the new Pionnière and Cahier bags. The small, shoulder-strap bags retail for about 1,750 euros and 2,400 euros respectively, with the round-shaped Pionnière inspired by hunting, uniforms and travel and the more expensive Cahier reminiscent of old book bindings and notebooks. The bags will be on sale from Friday in selected Prada stores in Milan, London, Paris and New York.