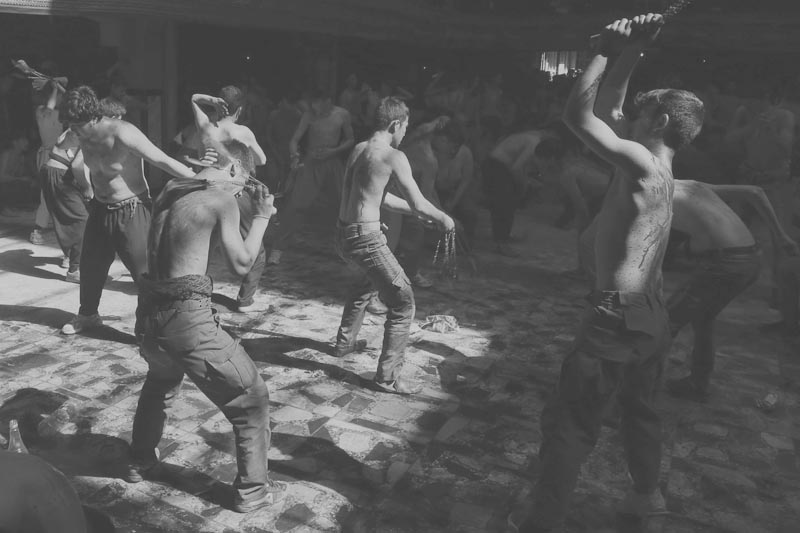 Shiite Muslim men beat themselves with knives attached to chains during a procession to mark Ashoura in Kabul, Afghanistan on Sunday, October 9, 2016. Photo: AP/File
NEW YORK: Add self-flagellation to the list of ways to get a dangerous viral blood infection. Researchers said Wednesday that they were initially puzzled how 10 British men had become infected with a little-known virus because the men hadn't taken risks usually associated with the infection. But then investigators learned they had participated in blood-shedding religious rituals — cutting or whipping themselves — in Iraq, Pakistan, India and the United Kingdom. "There have been suggestions that you might spread infections through this route, but it has never been described before" in a published medical study, said Dr Divya Dhasmana of St Mary's Hospital in London. She is one of the authors of the study released Wednesday in a journal published by the US Centers for Disease Control and Prevention. The men were infected with human T-cell leukaemia virus type 1. Most people infected with the virus never develop symptoms, but some develop terrible illnesses, like deadly blood cancer or a debilitating nervous system condition. HTLV-1 spreads through breastfeeding, sex, blood transfusion and sharing of needles. Experts have estimated that up to 10 million people worldwide are infected, though it is considered relatively rare in the United States and the United Kingdom. None of the men in the study had symptoms. They were diagnosed through tests that preceded blood donations or in vitro fertilisation procedures, tests that are not routinely performed in other settings. They came to the attention of researchers at St Mary's Hospital, which is a referral centre in England for HTLV-1 cases. The mystery was solved when Dhasmana noticed scars on the back of one man, leading to questions that revealed all 10 men had participated in religious self-flagellation. One ritual involves striking the forehead with a knife and then passing it along to other men. Another involves striking the back with a chain of blades or other bladed implements. One man said that when he did it, the blades being passed around were soaked in a bucket containing an over-the-counter antiseptic solution. But that is inadequate to prevent the spread of HTLV-1, Dhasmana said. The practice of whipping or cutting oneself has been practised among different religious groups, most notably by Shiite Muslims on the holy day Ashoura. Usually, only men do it, and it's controversial even within religious communities. Dhasmana said: "Our message is not 'Don't do it.' Our message is 'If you do it, don't share equipment.'"
#leukaemia #infections #religious ritual #self-flagellation
You May Also like: