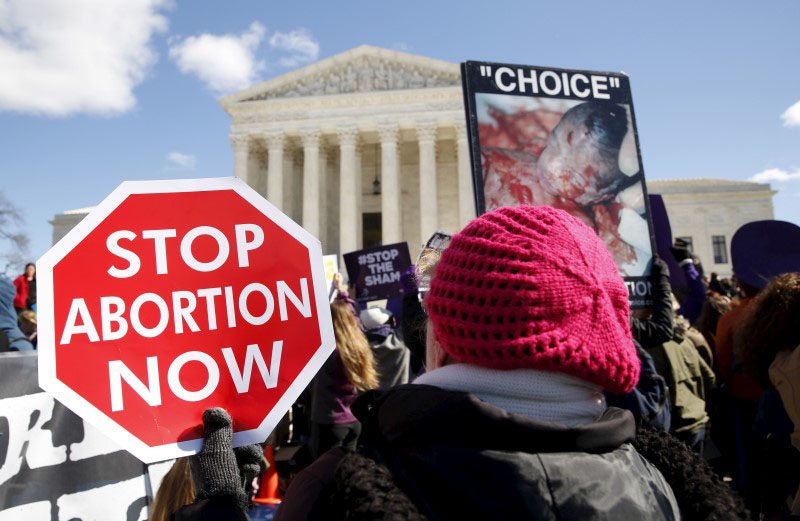 Protesters demonstrate in front of the US Supreme Court on the morning that the court took up a major abortion case focusing on whether a Texas law that imposes strict regulations on abortion doctors and clinic buildings interferes with the constitutional right of a woman to end her pregnancy in Washington March 2, 2016. Photo: REUTERS
CLEVELAND: Ohio lawmakers approved a bill that bans abortion once a fetal heartbeat can be detected, as early as six weeks after conception, clearing the way for one of the most stringent abortion restrictions in the United States if it becomes law. The Republican-led state House of Representatives and Senate passed the so-called "heartbeat" measure late on Tuesday, sending it to be signed into law by Republican Governour John Kasich. Kasich, an abortion opponent, has in the past questioned whether such legislation would be constitutional. The US Supreme Court legalised abortion nationwide more than four decades ago, but states were allowed to permit restrictions once a fetus was viable. Some states, particularly those governed by Republicans such as Ohio, have sought to chip away at a woman's right to end a pregnancy. Lower courts have struck down similar "heartbeat" laws in North Dakota and Arkansas and the Supreme Court refused to hear appeals on those rulings in January. But now, with Republican President-elect Donald Trump having the opportunity to fill at least one Supreme Court vacancy, conservatives in Ohio hope that the legislation can withstand a challenge in court. "A new president, new Supreme Court appointees change the dynamic, and there was consensus in our caucus to move forward," Senate President Keith Faber told the Columbus Dispatch. "It has a better chance than it did before," Faber said of the bill's chances of surviving a constitutional challenge, according to the Dispatch. The heartbeat legislation has been approved twice before by the state's lower house only to fail in the Senate. The abortion legislation was part of a wider bill on reporting child abuse. It does not make exceptions for rape and incest, though it does allow for abortions that would save the mother's life, according to text of the legislation. Some women's rights groups were swift to condemn the approval of the bill. The Guttmacher Institute, a nonprofit research organization that supports abortion rights and tracks abortion legislation, said it would be one of the most restrictive abortion laws if enacted. "Banning women from getting a medical procedure is out of touch with Ohio values and is completely unacceptable," abortion-rights advocacy group NARAL Pro-Choice Ohio said in a statement.
#United States #Donald Trump #US Supreme Court #abortion #Ohio #NARAL Pro-Choice Ohio
You May Also like: