BARA: Police seized a huge amount of marijuana from a truck in Jitpursimara Sub-metropolitan City-7 of Bara district, in the wee hours of Wednesday. 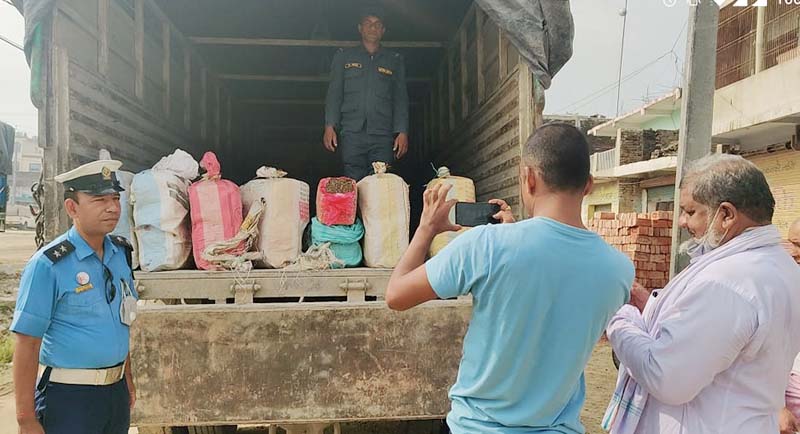 Mediapersons taking picture of marijuana seized from a truck at District Police Office, Bara in Jitpursimara Sub-metropolitan City, on Wednesday, October 7, 2020. Photo: Pushpa Raj Khatiwada/THT
A team of police personnel deployed from Jitpur-based Area Police Office (APO) seized 147 kilogrammes of marijuana being transported by the truck (Na 7 Kha 9554) at Jitpur along Birgunj-Pathlaiya road section, at around 3:00 am today. A team of security personnel under the command of Sub Inspector of Police (SI) Dev Bahadur Chand at the APO seized the illegal drugs while carrying out security check on vehicles passing by the road. According to Deputy Superintendent of Police Gautam Mishra, at Bara District Police Office, police became suspicious as the driver of a truck behind three trucks intercepted for security check got off the vehicle and ran away. Immediately, the police team searched the truck and found a huge amount of marijuana packed in seven packages. Meanwhile, the impounded truck has been kept at the DPO while the search is on for the driver who fled the scene.
#Marijuana #Bara #Jitpursimara #truck laden with marijuana
You May Also like: