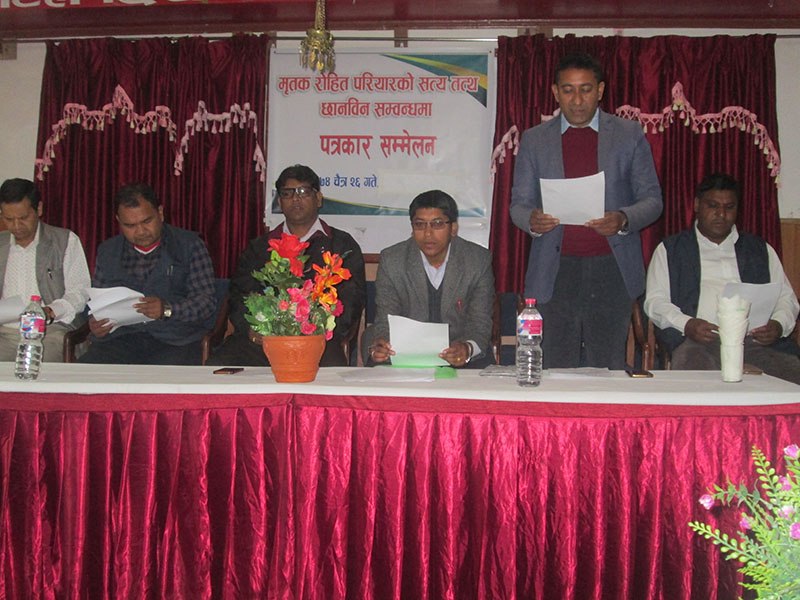 Press meet organised by deceased Rohit Pariyar's relatives, in Pokhara, on Monday, April 9, 2018. Photo: Rishi Ram Baral
POKHARA: Relatives of a two and a half year old boy, who died while undergoing treatment, have asked hospital administration to investigate into the boy's death, citing negligence on part of medical personnel. Rohit Pariyar of Parsyang in Pokhara Lekhnath Metropolitan City-5 died on April 5 during the course of treatment at Paschimanchal Regional Hospital under Pokhara Academy of Health Sciences. A struggle committee has been formed to establish the truth behind the boy's death. The committee, through a press meet organised today, has demanded the hospital administration to ascertain the cause of death and to take strict actions against the guilty. Talks have been going on between hospital administration and the family of the deceased. In the press meet, the coordinator of the struggle committee Shiva Pariyar has said, the committee demanded that truth must be brought to light regarding Rohit's death and action must be taken against the guilty, a commission must be set-up to investigate the incident, the hospital administration must be made aware to not repeat such acts of negligence, and the report submitted by the investigation commission must be satisfactory to the kin of the deceased. According to Rohit's grandmother Maya Pariyar, Rohit had been admitted to the hospital on the evening of April 3 after having fever. The boy had been given one bottle of normal saline and medicine via injection, after which he had been shifted to the ward at 10:00 pm. Later at night, another medicine was orally administered to him, and the next morning the doctor said the child was normal. On the morning of April 5, two nurses had reportedly administered two injections in a 10-minute interval, after which Rohit's body had started turning blue, according to the boy's grandmother. The boy was shortly rushed to the ICU and a consultant was called in, however the medical personnel informed that the boy had passed away. The chief of paediatric department at the hospital Dr Shree Krishna Shrestha said, there had been no negligence on the hospital's part in the treatment of the child. Dr Shrestha had informed the boy's relatives that on the fateful morning, Rohit had been given Inj Taxim and Inj Ondem, after which the boy had unnaturally fallen into unconsciousness. He was rushed to the ICU, where the duty doctor had administered CPR on him and given Inj Dextose 10 per cent and Inj Adrenaline 1 ampule. The duty doctor had then consulted his senior who had given the boy an additional 0.5 ampule of Inj Adrenaline. Despite the efforts, Rohit's breathing and heartbeat became weak and he passed away. The boy's family has also appealed to the Chief District Officer of Kaski district Tara Nath Adhikari, who have assured the family of setting up an investigation committee. The relatives have denied claiming the body of the deceased until truth has been determined regarding the incident.
#medical negligence #struggle committee #DIES #Relatives #Pokhara Lekhnath Metropolitan City #Paschimanchal Regional Hospital #Rohit Pariyar #under treatment #2-year-old boy
You May Also like: