300 families at risk of flooding in Rautahat 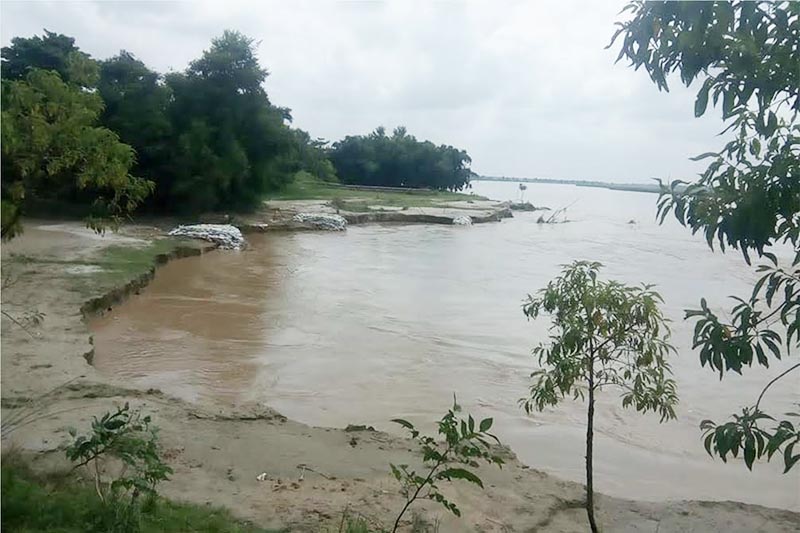 The swollen Bagmati River eroding land in Durga Bhagwati Rural Municipality, Rautahat, on Friday, August 31, 2018. Photo: THT
Rautahat, August 31 Locals of Badaharwa village in Durga Bhagawai Rural Municipality-5 are spending sleepless nights due to fear of floods. As many as 300 families live in the village on the banks of Bagmati River. Locals said, every night they either left the village for a safe place or spent sleepless nights due to fear of floods ever since the onset of monsoon this year. Local Bhola Sah, 70, said residents of the village feared that the river might breach the embankment and sweep away their village. "The Bagmati River has been causing damage to Badarhawa village every monsoon, but the government has not taken action to alleviate the locals’ plight,” Sah added. Flood in the Bagmati River had displaced half the households in the village some 20 years ago. Landless and impoverished people are forced to live on the river banks after they were displaced two decades ago. Another local Indrajit Das said they had to use a boat to cross the river during monsoon. The flood in the river is swiftly eroding the embankment on the east coast of the river. This has terrified the locals of Badarhawa village. A government team comprising CDO Govind Prasad Rijal, SP Kedar Dhakal, APF SP Krishna Dhakal and journalists had reached Badarhawa village yesterday. According to local Dinesh Baitha, locals had urged the government team to take immediate steps to check erosion and control the river. Durga Bhagawati Rural Municipality chair Arun Kumar Sah said locals were facing the risk due to negligence of a contractor entrusted with constructing a bridge in the area. “Pappu Construction, the contractor, has made no progress in construction of the bridge after it erected the pillars,” Sah said. Bagmati River Control Project Chief Divisional Engineer Raj Kumar Sriwastab said that five small spurs could not control the flooding river and construction of temporary spurs was under way. CDO Rijal said that his office had directed the concerned rural municipality to control the flooding river. He pledged that his office would initiate action to prevent possible damage.
#Rautahat #Badaharwa village #Durga Bhagawai Rural Municipality #Rautahat flooding
You May Also like: